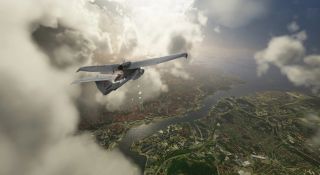 2020 is upon us, y'all, and that's not just the year we're in—it also feels like it's the number of games coming out in the near future. There are so many! We've started rounding up every upcoming PC game out in 2020 that's worth paying attention to, along with what we know about when to expect it. It's our comprehensive guide to the next year in PC gaming.

We've organized the new games of 2020 by month and highlighted the biggest games of the whole year just below. Check back often to see how release dates have changed and what new PC games have popped up. Also, don't miss the "Release date TBA" page for everything that hasn't committed to an exact month yet. There's a whole lot of 'em.

January 9| Capcom | Link | Action RPG
Those darn console players got Iceborne early just like the base game, but at least we get to play it in the actual dead of winter. Iceborne comes with a new suite of monsters to, what else, hunt, a new snowy biome and campaign, and a new "Master Hunter" rank.

January 17 | Bandai Namco | Link | RPG
It's a full-fledged RPG recounting (once again) the saga of Goku AKA Kakarot. Flashy DBZ-style combat seems to take a page from the 3D brawler Jump Force.

January 21 (Early Access) | Crema | Link | Basically a Pokemon MMO
A Pokemon MMO in all but name/license, TemTem lets you wander a world filled with other players and a whole bunch of monsters to catch, train, and fight. You can join friends to play through it all together, including 2v2 battles.

January 23 | Bigben Games | Link | Sports
The rules of rugby aren't entirely clear to me, but I do know that Bigben's Rugby 2020 looks like a faithful recreation of the sport in video game form. It's got burly men, strong kicks, and a ball that looks like a slightly bloated football.

January 28 | Blizzard | Link | RTS
The long-awaited remaster of one of the greatest strategy games is almost here. On top of updated graphics, Reforged is also revamping Warcraft 3's online infrastructure to make it feel competitive in 2020.

January 28 | Typhoon Studios | Link | Co-Op Exploration
Explore and catalog the titular Savage Planet, and find a whole bunch of oddities that make The Outer Worlds look like a pleasant stroll. Run around with a friend in co-op, too.

The Walking Dead: Saints and Sinners

January 23 | Skydance Interactive | Link | VR First-Person Action
Skydance took over The Walking Dead game rights after Telltale bit the dust, and it looks like a VR FPS/action game is their first big stab at it. Fight your way through an undead-infested New Orleans in search of a secret that might turn the tide of war between human factions.

January 29 (Early Access) | Vertigo Gaming | Link | Cooking
The popular cooking franchise goes on the road. You’re managing a food truck while headed to the national cooking championship. Also it’s 2042 and humanity has been ravaged by war. Oh my god, is that ice cream truck shooting at us? Holy shit!

There are tons of new games coming in 2020, but only some can truly knock it out of the park. Here's what we're most looking forward to, and what we think will be the biggest games of the year.

March 2020 | Valve | Link | VR
They did it. The madmen, they did it. It’s not quite Half-Life 3, but it is a full-length Half-Life game starring Alyx Vance, all played in VR, so it might as well be.

March 20 | id Software | Link | FPS
Doom Eternal brings hell to Earth, a nice change of setting from 2016's excellent reboot. Expect to fight twice as many demons in this installment, using a brutal upgraded armory. This includes a new version of the Super Shotgun, which features a grapple-friendly 'meat hook' on the end, and hopefully a ton more ludicrous weapon mods.

September 17 | CD Projekt Red | Link | RPG
Hackers, limbs with swords in them, and Keanu Reeves—what more can we ask for?
The team behind The Witcher 3: Wild Hunt turn the classic tabletop game into a full-fledged adventure. Cyberpunk 2077 was originally planned for April, but will now release in September after a delay.

2020 | 343 Industries | Link | FPS
We now know that Halo Infinite will be a launch title for the next gen Xbox "Scarlett." It's also coming to PC. We didn't get to see any gameplay at E3 2019, just the spiffy story trailer you see above.

2020? | Techland | Link | Open world
For all it’s glorious zombie parkour, the original Dying Light really failed to give players a narrative worth remembering. Techland clearly wants to change that by bringing on writing powerhouse Chris Avellone (of KOTOR 2, Pillars of Eternity, and Fallout: New Vegas fame) so it can give you more a more compelling reason to hopscotch the undead. Narrative choices in-game will alter the world, like a certain faction constructing additional outposts and unfurling banners across walls, which you can slide down like a drunken musketeer. As for the zombies, they’re more likely to hide from the sun now, but that makes their dark indoor dens that much more dangerous and lucrative for brave (read: totally dead) acrobats. Dying Light 2 has been delayed from its original "spring 2020" window and doesn't yet have a new planned release.

"Early Summer" | Kojima Productions | Link | Geopolitical QWOP
Hideo Kojima's first game since unshackling himself from Konami and buddying up with Sony. Shockingly, we get a PC release only half a year or so after the PS4 debut, if estimates are to be believed. Reconnect a post-apocalyptic America by delivering packages and establishing network links. As you can imagine, that's the simplest description of a Kojima game we can write without writing a college dissertation.

2020 | Asobo | Link | Flight Sim (duh)
Asobo and Microsoft are using Bing Maps of all things to scan the known world, including Andy's hometown of Glasgow, with a scary level of detail. Live weather data will factor into flight plans, too.

2020 | Hardsuit Labs | Link | RPG
The vampires of modern day Seattle are missing their leaders, leaving a massive power vacuum for clan leaders to fulfill. You're a newly created vampire (a "thinblood") who gets to waltz into this simmering city and the politics and clashes of its various clans. Check out everything else we know about this long-awaited sequel.

"Next Fiscal Year" | Ubisoft Montreal| Link | 3v3 Tactical Shooter
It appears that Rainbow Six Siege's popular Outbreak mode was a sort of proof of concept, with alien zombies and some recognizable operators hunting them down. Ubisoft says of Quarantine: "What Siege is to the PvP shooter genre, we will be to PvE co-op." There's a chance this one comes out in 2021, what with Ubi's delay.

"Next Fiscal Year" | Ubisoft | Link | Action RPG
Another victim of Ubi's decision to delay some key titles. You'll get to take on a fascistic government in modern-day London, and damn near anyone you meet (and their unique talents) can be recruited to the cause of overthrowing them. Will Ubi finally take a meaningful political stance? Probably not, but look! Piggy masks!

2020 | Creative Assembly | Link | Strategy
The Total War Saga games (of which this is only the second) focus on a very specific period of time. We've got the classic war between the Greeks and the Trojans across the Aegean, secret agents, no cavalry, and special troops designed to evoke the origins of mythic beasts, like a minotaur who's just a big dude wearing a bull's head cap. Check out everything else we know.

September 4 | Square Enix | Link | Action RPG
Kamala Khan aims to get the Avengers back together in this action RPG with single-player, co-op, multiplayer, and an all new tale divorced from the MCU. We keep getting some vague Destiny vibes what with the apparent focus on replayability.