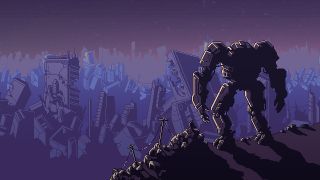 Independent studios generally have more freedom (and more desire) to experiment with the medium, to create the kind of games the blockbuster market considers unthinkable. They may bring back genres the mainstream has forgotten, imagining what they would look like today if they'd carried on being made through the years. And they can invent brand new genres whole cloth, innovating in ways that bigger studios never could.

You'll find both kinds of games in this list of the indie games the PC Gamer team cherishes the most. These are the best indie games to play right now, the ones we recommend today.

Jody: Turn-based games don't always respect your time—opponents who take forever, entire turns where nothing happens, animations that feel like everyone's wading through stew. Into the Breach does not waste your time, which is apt because it's about time travel.

In the future giant bugs crawl out of the ground and ravage the world, and our only hope are mech pilots from an even more distant future who travel back to save us. As a band of three pilots in vehicles that would make very cool toys, you're humanity's last hope. Fortunately, you can see what the bugs plan one turn ahead and can dodge out of their way so they attack each other, or dodge into their way to protect a building full of civilians they were about to demolish. It's a mech vs. monster dance-off.

And it's conveniently bite-sized. Maps are small, load fast, and only have to be protected for a few turns. Into the Breach feels worthwhile even if you've only got minutes. With hours to spare you can play a full run, save the day, then take your favorite pilot and leap back into a different timeline to do it all again.

Shaun: Enter the Gungeon is an arcade roguelite about shooting bullets with bullets. In other words, the enemies are ammunition. As one of four distinct characters, you'll dodge-roll, kick furniture and, most importantly, destroy bullets with bullets. There are hundreds of distinct weapons, ranging from a bow and arrow through to guns that shoot actual bees.

Enter the Gungeon exists in an absurdly busy genre: each week I write about a new roguelite. But Enter the Gungeon is special because not only does it nail the essentials (shooting, movement, sheer variety of weapons and items), but it also doesn't complicate things too much. Other arcade-centric roguelites like Flinthook and Rogue Legacy have had a good go at mixing compelling action with a simplified approach to the genre, and while each are great they end up feeling repetitive: like a jumble of the same rooms. But it's the weaponry that keeps Enter the Gungeon fresh. It's also really charming, somewhat against the odds.

Austin: I'd also like to add that there's a gun that shoots guns that shoot bullets.

Chris: It feels strange to play a city-builder that's not open-ended and doesn't let you tinker with your city forever. Also strange is that no matter how efficiently you design your city, your residents may kick your ass out of it due to events that take place elsewhere. But that Frostpunk does things differently is one of the things that makes it great.

Frostpunk is both grim and beautiful, a blend of survival and crisis management that leaves you facing tough choices, sometimes unthinkable ones, as you attempt to build a city that will protect your residents from a world gone cold. You're not just trying to keep them warm and fed, but keep them hopeful, and that's no simple matter when the only thing more bleak than the present is the future. In addition to building, gathering resources, and sending expeditions into the frozen world, you have to grapple with passing laws that may save your citizens' lives but at the same time may erode their freedom. There's rarely a moment that's free of tension and worry, and rarely a choice that isn't second-guessed.

Jody: Klei's 2013 survival game is a playable Edward Gorey book where you'll probably get eaten by dogs or starve during the long winter—a possibility the name does warn you about, to be fair—while learning how the ecosystem of its unusual world works. You discover the importance of the wild beefalo herd, and the value of dealing with the Pig King.

And then you do it again, with friends.

The survival games that followed Don't Starve filled their servers with desperate lummoxes all flailing at trees and rocks and each other. Don't Starve Together made multiplayer survival into something that's not as easy to make memes of, but a lot more fun. Sure, you can play it competitively but it's best as a co-operative village simulator where you start by pooling your rocks to make a firepit and eventually you're taking down bosses then crafting statues to commemorate your victory in the town square.

Shaun: Celeste is a tough 2D platformer with a 16-bit retro aesthetic. If I had a pixel for every time I’ve written about a game with those descriptors, I’d maybe have enough to render Crysis. So what makes Celeste special? The reasons are many and varied: firstly, it carries itself differently to other deliberately hard platformers like Super Meat Boy and N++. Studio Matt Makes Games wants everyone to finish this game, not just Kaizo Mario World speedrunners, so its pacing is careful and its attitude encouraging. While protagonist Madeline doesn’t have the most novel moveset in a platformer (she can grab certain walls and dash through the air), the action is precise, smooth, and unusually, you’ll actually care about her journey.

Perhaps the variety is what really elevates Celeste: this is a game with set pieces that aren’t just saved for the boss battles, and while it is fundamentally a series of platform challenge rooms, it does feel like you’re navigating a world (in this case, the mountain Celeste). Not since Shovel Knight have we had a game that manages to cater for players who might not enjoy the irreverent, punishing veneer of most modern twitch platformers.

Shaun: You're going to hate Rain World if you approach it with the wrong attitude. Firstly, it looks like a platformer, but it's not: it's a punishing survival game. The first hour or so spent in the game also lacks promise: the controls are slightly fiddly because (by necessity—this is a survival game) they aren't as intuitive as most 2D games. You have to learn them (Rain World is all about learning, but you'll still sometimes get unlucky).

Once you surmount these prickly beginnings, Rain World is remarkable. You play as a slugcat one tier above the bottom of the food chain, and you must negotiate a labyrinthine and hideously broken open world in order to survive. Rain World is cryptic, uncompromising, and once given the chance one of the tensest and most atmospheric 2D games I've ever played. If you must make it easier, there have since been options added to the game to allow that. But I wouldn't if I were you. Rain World is determined to wrest empowerment from the player, determined to eschew any shred of the power fantasy so dominant in its medium. And yet it is logical, it's not "unfair", it’s not "poorly designed". It just doesn’t care about you.

Jody: My party includes a skeleton who has mastered poison magic, a dwarf pirate, and a fire-breathing lizard prince. By the end of the game, one of them will be a god.

Plenty of developers have resurrected the bones of the isometric RPG and added modern skin to it, but only a couple of those games really work as both reminders of the old days and great RPGs worth recommending to people who don't have nostalgia goggles near at hand.

Divinity: Original Sin 2 takes the traditional map-hopping fantasy quest structure and adds a mindbending array of abilities to fill multiple hotbars, sidequests that feel like tonal breaks from the storyline but also seem like they matter on their own, and a degree of characterization we expect from big-budget RPGs. Every party member has their own thing going on, their own plot to follow and life to live, and can replace your character if they die. They can even be selected to take the lead in conversations, although saying hi to people as the skeleton without a disguise on will raise some eyebrows.

Wes: Original Sin 2 has great writing, clever and creative quests, and strong characters with arcs that span a near-hundred hour quest, all substantial improvements over the first game, which was already a hell of an RPG. What I really love about Original Sin 2 is that anytime you ask yourself the question "Can I do this?" you probably can. Savescum to your heart's content to see what happens when you kill an NPC, or sneak somewhere you aren't supposed to be, or figure out how to jump over a wall instead of solving a puzzle. Larian built an insanely open-ended RPG that encourages you to play however the hell you want, and then had the audacity to put a great story and combat system in it, too.

Jody: A one-level first-person shooter where the level is a hellish arena, and the enemies are skulls and flying snakes and other escapees from heavy metal album art. Devil Daggers takes the speed and circle-strafing of Quake and distills it into one perfect minute, or longer if you're better at it than I am. It almost takes longer to describe than it does to play—almost.

Austin: SteamWorld Dig 2 is a 2D Metroidvania-style platformer about digging tunnels in a fully destructible world. You collect resources, haul them up to the surface, upgrade your gear, and dive back down. As you rack up upgrades, from your pickaxe to gadgets like the grappling hook, jackhammer and steam-powered grenade launcher, you unlock new areas to explore and new ways to explore them.

It's this magical mix of Metroidvania exploration and the resource collecting that makes survival games so cathartic, and it works because it lets you go at your own pace. You don't just go a little deeper each time you upgrade your stuff; you get a little more adventurous. You start to experiment with different gadgets and use them in new ways, and this changes the way you dig tunnels, which act like scaffolding for getting around levels. And no matter what you do, you're always making progress. Everything feeds into everything else, so you're constantly motivated to dive deeper and discover new temples to ransack.

Jody: Depending how you feel about diving, Subnautica can be either a wonderful opportunity to explore an alien aquarium or a straight-up horrorshow. Even with the survival stuff turned off so you don't have to regularly grab fish and eat them as you swim past, its depths contain claustrophobic tunnels and beasts big enough to swallow you whole. The thing is, Subnautica works as both a tense survival game about making it day by day in a hostile alien ocean and a way to drift around meeting strange sea creatures (and eating them).