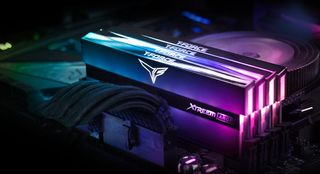 Teamgroup says it's new T-Force Xtreem ARGB DDR4 memory kit is the industry's first to have a mirror design, though that's not entirely true—Corsair offered up a mirror finish on its Dominator Platinum Special Edition DDR4 memory kits (limited to just 500 units), and G.Skill's Trident Z Royal RAM is reflective as well. The Xtreem is still a somewhat unique kit, though.

It combines a mirror finish with RGB lighting. So do Trident Z Royal kits, but on the Xtreem, the RGB lighting shines through the entirety of the heatspreader, as shown in the image at the top of this article. If the lighting is turned off, here's what the memory modules look like:

Apparently it took some "creative thinking" and special engineering to achieve the visual effect. It also required "spluttering," a term I never heard of before. According to Merriam-Webster, one of the definitions is "to make a noise as if spitting." Color me enlightened (and a bit amused).

"With creative thinking, T-Force Xtreem ARGB gaming memory is the first in the industry to feature full-screen light guiding technology. After researching optical principles and characteristics of light, a specially designed LED lighting method and addressable RGB LEDs are used to allow players to change the RGB lighting freely. The product’s full mirror screen is a combination of special spluttering process and full-screen light guiding technology, which is capable of directly penetrating and reflecting surrounding products," Teamgroup explains.

All that fanciness aside, Teamgroup says the memory chips in these kits go through a rigorous testing process. There are five kits in all, ranging in speed from 3200MHz to 4000MHz. They include:

Generally speaking, lower timings equate to better performance, though it's mostly negligible outside of synthetic benchmarking. That's to say, between the two DDR4-3600 kits above, the tighter-timed kit is not going to make your games run significantly faster, at least not to where it's perceptible.

RAM speed and capacity matter for gaming, though, depending on the platform. Alan ran some testing earlier this year and found that going from 8GB to 16GB yielded a significant performance bump in some games—14 percent in Total War, for example, on an AMD Ryzen testbed. I'd also consider 16GB to be the sweet spot when shopping for the best RAM for gaming.

Where Teamgroup's newest RAM falls in the grand scheme of things will depend on pricing and availability, and unfortunately, those details are not yet available.