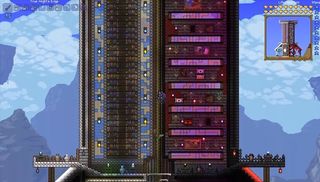 Terraria developer Andrew Spinks announced last week that the 1.2 update will be ready (and free) on Steam on October 1, while promising a new trailer would soon be in our midst. This is that trailer.

It's a little tough to find out exactly what the new update's bringing to the expertly-crafted table, what with barrage of spells whizzing over our heads, though people should expect new equipment, enemies, furniture, biomes, spells, character menus—I could go on and on, but we'd be well into October by the time I finished the list. Trust me— it's a lot of stuff .

Given that the folks at Re-Logic have been working on 1.2 since the start of 2013, I'm curious if this will actually be Terraria's final update. You don't often see updates of this magnitude coming out a full two years after a game's release. I'm not complaining, mind you, but Re-Logic mentioned an “even better project” back before the 1.2 update was even announced, which makes me suspect something's lying in wait on the back-burner. It's just something to chew on while you sift through all the different touches Re-Logic has added to Terraria's already dense world.