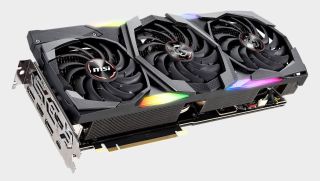 If you've been biding your time to make the jump to a ray-tracing GPU, your moment has arrived. Right now, Walmart is offering the MSI GeForce RTX 2080 Gaming X Trio for $649.36 ($250 off). This GPU features 8GB of DDR6 VRAM and a triple fan form factor for excellent airflow. While the standard 2080 has since been outclassed by it's "super" successors, it still retains remarkable performance at a much lower price point than it's younger siblings.

At launch, there were very few games that could take advantage of Nvidia's new ray-tracing technology, and while that list is far from extensive at present, the number of games that support this tech along with the AI-based DLSS, are slowly becoming more prolific. In an effort to showcase this new technology, Nvidia is continuing its trend of packaging games with its best graphics cards by providing codes for Call of Duty: Modern Warfare with the RTX 2080.

From a technical perspective, the RTX 2080 possesses fewer CUDA cores and a slightly lower base clock speed than the 2080 super. This difference was much more meaningful during the launch of the 2080 super when it became available at virtually the same MSRP as its predecessor, but now you have the option to capitalize on savings with a very modest hit to performance. Of course, if this discount isn't enough for you, you can always check out our best Black Friday Nvidia deals if you can hold out until November.