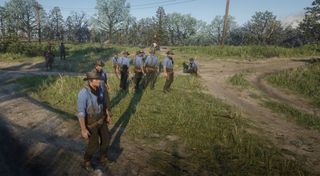 Announced just before Red Dead Redemption 2 launched on PC, multiplayer mod framework RedM is out now. Created by the makers of GTA 5's FiveM , it lets cowboys create custom multiplayer servers where they have control over settings they'd normally never have access to.

Essentially, it lets you tweak your multiplayer server in the same way you can mess around with the singleplayer mode. You can download it here, and while there isn't a feature list yet, it should be similar to its predecessor, which allows players to add custom cars, weapons and maps, play with more people, or turn the game into your own personal playground where it's just you and the AI.

Rockstar is no friend to multiplayer mods, unfortunately, and shut down plenty of them in GTA 5. FiveM and RedM, however, don't mess with your installation and you can switch between them and GTA Online and, hopefully, Red Dead Online without getting banned. You should still exercise some caution, though.

In this screenshot from one of the tests below, there's an army of Arthurs gathering, which is faintly ominous.

And here's a terrifying mutant duck posted by Disque on Twitter. If you've been messing around with mods in the singleplayer game, you might already be used to transforming into animals, giant or otherwise, but until RedM it wasn't possible online.

If you've got problems or questions, there's a RedM section in the FiveM forums that should sort you out, or you can head over to the Discord channel.