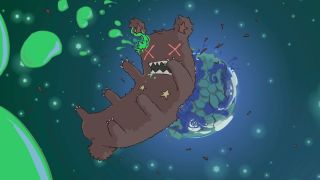 The Behemoth announced last month that the studio's long-in-development fourth game, previously known as 'Game 4', will be officially titled Pit People. That was nice, but as far as useful information goes, it didn't amount to much. Thankfully the Battleblock Theater developers have released the game's first trailer, and it provides a satisfying glimpse at how Pit People will play when it releases next year.

But then, if you want to see the game in action without all the promotional theatrics, there's a solid 20 minute gameplay video over here. The game still doesn't have a release date, but the end of the above trailer does confirm the game is coming to Steam, in addition to Xbox One.