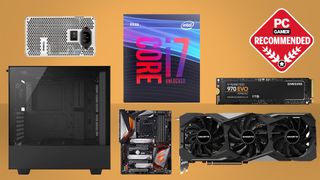 If you're looking to build a big, badass gaming rig, our high-end gaming PC build guide won't steer you wrong. Chances are if you're building something like this, you've already checked out our guide on how to build a gaming PC and put together a few systems on your own. Since you already know how the CPU fits into the motherboard, we can focus on what's important, helping you assemble a pile of components that will give you the biggest bang for a slightly less big collection of bucks.

With this machine, you should be able to play most games running at 1440p with a stable framerate. This isn't our 4K build—that's extreme, in our minds—but your games are going to look good and play well on this thing. At around $2,000 for the full kit, it damn well should. That said, you are getting one of the best CPUs for gaming and one of the best graphics cards. There's still a little room for improvement, but this is a top-flight machine.

If you're upgrading or replacing an old system, you may be able to reuse some old parts, like a power supply or even your case. That'll help keep costs down. If you plan to reuse anything, however, we strongly recommend you check the compatibility with our recommendations before kicking things off.

As always, this PC build guide amasses all the components you need to put together an excellent system, but it does not recommend a monitor or peripherals, such as a mouse and keyboard. If you're upgrading or replacing an old system, you should expect to use whatever you had. (And if you have a 1080p monitor, you might want to look at our guide to the best gaming monitors for something that can run at a higher resolution.)

Intel's Core i7 line sits in an interesting middle ground, following the release of the Core i9-9900K—an eight-core, 16-thread chip. The Core i5 is still more budget-friendly, but this Coffee Lake Core i7 has the same number of cores as the Core i9, just without Hyper-Threading. The six-core i5-9600K actually clocks a tiny bit faster than the eight-core i7-9700K, but the i5 is about $140 cheaper, making it a more cost-effective option. We still rank the Core i7-9700K within our best CPU for gaming picks, so there's a good reason why we'd put it in this high-end build.

Thanks to the removal of Hyper-threading, this CPU won't run as hot as the Core i9, so you can use a (potentially cheaper) air-cooling solution if you prefer that over liquid-cooling. You might not get as high of a maximum overclock, but the Core i7-9700K is still a pretty beefy CPU even at base clock, so it'll last for years to come. Also, the difference in performance between the Hyper-Threaded i7-8700K and the non Hyper-Threaded i7-9700K isn't an issue. The i7-9700K has additional cores over the i7-8700K that more than make up for it.

If you're only concerned with building a new PC for gaming, and not live streaming or video editing, the Core i5-9600K might be the better alternative. You'll save some money and can still clock close to 5GHz with adequate cooling.

Great gaming performance and features at a decent price

We like a motherboard with great features, good overclocking support, and plenty of extras—especially for a high-end build—which for an Intel chip usually means looking around the $200 mark. The Gigabyte Z390 Aorus Ultra is our pick, with everything you need, and probably plenty of things you'll never use.

It overclocks as well as other Z390 boards we've tested, and it comes with useful extras such as triple M.2 slots, Intel Wi-Fi Wave2 and Ethernet, along with flashy options like Aura-RGB lighting. There's room for more than one graphics card, and the built-in audio is top notch. Note that you'll need a power supply with both an 8-pin EPS12V and 4-pin ATX12V power connectors for this board (which the CM850x has).

Other options include the MSI Z390 Gaming Pro Carbon AC and Asus ROG Maximus XI Hero (Wi-Fi), any of which should please any gamer. If this isn't for you, here are the best gaming motherboards.

The GTX era is now over, unless you're looking at a midrange card. The RTX cards are the new kings of graphics performance, and the new RTX 2080 Super will get you everything you need. Nvidia's Turing RTX GPUs support ray tracing, DLSS, and have other architectural updates that boost gaming performance. This is the card to get if you're all about playing games at the highest resolution and fps possible. Unless you can justify the jump up to the RTX 2080 Ti.

In the year since Nvidia first launched its RTX cards, we've seen quite a few games adopt the technology. Battlefield 5 was first, and then we had to wait a while before eventually getting Metro Exodus and a patch for Shadow of the Tomb Raider. Control and Call of Duty have now joined the list, and there are half a dozen more ray tracing enabled games slated to arrive before the end of the year. If you're looking for a great high-end graphics card, the RTX 2080 Super is the best option right now.

As usual, deciding which RTX 2080 Super card to buy is largely personal preference. The Nvidia reference models at least don't carry a price premium this round, but if you want RGB lighting or a triple-fan cooling solution, you'll want to look elsewhere. Asus, EVGA, Gigabyte, MSI, Zotac, and other partners have options for every build, including at least one or two blower cards. For those that don't care about aesthetics, we generally recommend buying whatever 2080 Super card is cheapest. If you need more advice, here are the best graphics cards in 2019.

There’s a question that’s frequently asked about RAM in high-end PC builds: do you go for clock speed or quantity? While memory capacity can be a factor up to a certain point, going beyond 16GB requires very specific workloads before you really benefit. Increased memory speed, however, can benefit performance and framerates. G.Skill's TridentZ DDR4-3200 RGB balances price with performance, and anything faster usually costs substantially more.

Compared to typical DDR4-2400 with CL15 timings, the TridentZ improves performance by 5-10 percent. It costs about 20-30 percent more on the memory side, but if you look at the entire system it only increases the price by about one percent. And you'll never have to worry if your memory speed is slowing things down.

If you'd rather have more RAM rather than higher performance RAM, be prepared for a much larger increase in price—and the benefits of 32GB are only available if you're actually running workloads that need more than 16GB. There's no binary right/wrong answer to the question of speed vs. capacity, but most users will see more benefit from faster RAM, at least once we're at the 16GB level. For more tips, check our best DDR4 RAM article.

Plenty of fast storage for your games and other media

By moving to a full 1TB NVMe SSD, you'll have room for a large gaming library in addition to your Windows folder and a few apps—watch out for those 100GB games, though! Once you get used to loading games off an SSD, it's painful to go back to a traditional hard drive. We don't want any of you to feel pain with a $2,000 PC.

The Samsung 970 Evo delivers sequential read speeds of up to 3,400MB/s and write speeds of 2,500MB/s (that’s megabytes per second). It's not quite as fast as the more expensive 970 Pro line, or some exotic PCIe flash solutions, but you likely won't notice the difference. More importantly, you won't be spending a whole lot of time looking at loading screens.

You could save money by sticking with a slower SATA SSD—the Crucial MX500 1TB for instance costs about $80 less. If you're only worried about gaming performance, you generally won't notice the difference between a modest SATA SSD and an NVMe drive (until you verify a large game install in Steam).

Another option would be to stick with a 500GB 970 Evo as your boot drive, and then use a large HDD for archival purposes, including games you aren't actively playing any longer. With utilities like Steam Library Manager, you can easily move things back and forth between fast and slow storage over time. We'd rather ditch spinning disks completely, or at least avoid them as much as possible, which is sort of the point of a high-end build. You could also use PrimoCache to set aside part of your SSD as a cache, which is something we'll be testing in the future. If you need more, here is the best SSD for gaming guide.

A gold standard PSU to handle most builds

With an 850W output and a Gold Plus rating, the RM850x is a sensible PSU for most builds. In fact, it can even handle multi-GPU rigs, providing you're not using top-top-end cards (if you are, we'd probably recommend the Seasonic Prime 1000 Titanium). It's fully modular, comes with a nice quiet fan, and the price is very reasonable next to other PSUs that deliver the same kind of performance.

The only downside is that you might expect a slightly better efficiency rating for a truly powerful gaming machine. Gold Plus is certainly enough, but you'll always be casting jealous glances as Titanium standard PSUs, which will also double (ish) the price of your power supply. What we like about the RM850x is that 10-year warranty that comes as standard, which lets you know how reliable it is and how much confidence Corsair has in the product. If you need more ideas, here are the best power supplies for PC gaming.

A stylish case that's easy to use

PC cases aren't simple gray boxes anymore, they've become increasingly complicated. Modularity is great, and good cable management with a separate PSU partition is almost compulsory, as there's nothing like a tidy build with all the cables routed neatly out of the way. Things we don't really like (other than for aesthetic purposes): small cases that are a pain to set up and run hotter.

NZXT's H-series has some great cases, and the new H500 / H500i has nearly everything we could want. (Here's a breakdown of the H500 vs H500i.) Not only does it have an understated kind of beauty, but it's available in white or black, with several color accent options. Airflow is decent, and there are plenty of options for routing cables, storing SSDs, and more, with room for up to a 280mm radiator in the front.

Cases are highly subjective, however, and our previous pick, the Cooler Master MasterCase 5, remains a great option that's geared toward tweaking and liquid cooling. If you're looking for something a bit flashier, or just want other ideas, check our best mid-tower case and best full-tower case guides.

A great solution to keep your CPU cool

We're big fans (pun totally intended) of AIO liquid coolers, but want something a bit better than Cooler Master's Hyper 212 Evo for this build, so we've opted for the MasterLiquid ML240R. It's reasonably easy to install as far as liquid cooling goes, and it works well.

We've opted for a 240mm cooler, with two fans, which should be more than enough for the Core i7-9700K processor's heat generation. That also gives us a bit of breathing room when it comes time to install the radiator in a case. Larger 280mm radiators would fit our case, but can be a tight fit even in large and spacious cases, so the ML240R is a bit easier to work with.