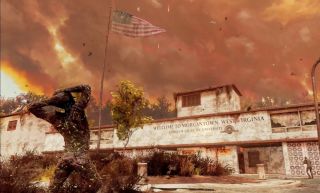 At the Fallout 76 roundtable at QuakeCon today, a new map was announced for Nuclear Winter—Fallout 76's battle royale mode, which is currently in beta. The new map will feature the Morgantown area, which includes locations like the Morgantown Airport and Vault-Tec University. It's also the location of the tallest point in Appalachia, which could add a bit more verticality to the BR mode.

The Morgantown location will also allow for different regional PvE enemies to enter the mix, like the Grafton Monster. There's also a big lake in the zone, which could make for a nifty way for players to get quickly irradiated and gain mutations (in Nuclear Winter, mutations only have positive side-effects, no negatives).

Also, coming to Nuclear Winter in August, players will be able to choose some of the perks they use instead of relying simply on randomly assigned perk cards. If you obtain a duplicate perk card, you'll receive an 'Overseer Ticket' which you can use to unlock a new perk to be used in future matches.

There's no specific date for the Morgantown map's release, but a graphic shown during the roundtable lists it as coming in September.