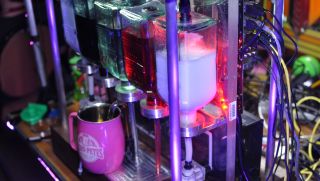 Every year at QuakeCon, thousands of people set up their PCs to spend four days playing games together in a massive LAN. Of course, getting lost in a crowd of so many other PCs spurs a few overachieving engineers to build bigger and better rigs.

Who had the fanciest PC of the show this year? Here are our ten favorites. If you want a closer look, clicking the icon on the lower-right of each image will let you choose to see a full-size image.

I'm a sucker for cases made out of wood, but the stained glass panels on this case are what really caught my attention. Inspired by the architecture of Frank Lloyd Wright, this case features two hand-made stained glass windows and thin parallel stripes of wood on the front. An old-fashioned typewriter keyboard and 3D-printed retro mouse complete a beautiful, majestic design.

This case started as a way to show off a beautiful, new, curved 34" widescreen monitor. The case maker built a long panel of components around a custom-built curved metal chassis. All of the major components were also lit from behind by gentle lighting panels pioneered for souped-up car audio systems. The effect is gentle, and graceful, working nicely with the curve of the monitor it showcases.

The maker of this case took a slab of live-edge Walnut and milled it out, carving space for each component. The woodwork is gorgeous enough, but the showpiece of this case is the row of liquor bottles. The two bottles on the ends bubble with coolant running through the PC. The three in the middle are filled with Jägermeister, peach schnapps, and cranberry juice. If the PC's owner logs in while a mug presses down on a sensor, the PC mixes and pours a red-headed slut.

One of the largest crowds clogging the walkways of the BYOC formed around this bizarre case. The InWin Z-Tower is a spiral of pure aluminum sitting in an 11-gallon reservoir full of water. There's no radiator; instead, a pump sends a waterfall twirling down the twisting arms of the case, turning the entire aluminum chassis into a huge heatsink. This thing is as beautiful as it is fragile: the slightest splash hitting the components could lead to an instant short.

An otherwise standard PC case got a nice QuakeCon-themed upgrade with orange lighting, window stencils, and a fully 3D-printed rocket launcher spawn from Quake Champions. The rocket launcher rotates, spotlit from below by a lovely red glow.

Unlike a lot of cases, this PC doesn't have a main gimmick or theme. The imperial symbol is front and center and the white-and-black color scheme is very "Stormtrooper," but for the most part this is just a beautifully-made PC. Super clean wire management and a pair of handsome Noctua Chromax fans stand alongside the CPU's water block.

There's a lot of electrical- and lightning-themed cases at QuakeCon, but no number of electric blue LEDs can be as badass as this custom-fabricated wood-panel case. The case itself was welded out of steel bar stock with Maple wood panels attached to the sides with magnets. The maker used high-voltage lines to burn Lichtenberg figures into the wood, a process that is as cool as it is super dangerous. This PC builder made it through safely, though, and has a nice case to show for it.

Everything about the interior of this case feels cold. Icy white and blue fixtures, white cabling, and clear coolant tubes filled with frozen-looking liquid. Finally, the exterior of this case is lined with a shaggy fur pelt. (Faux, I hope!)

This tall monster of a PC is part of a growing trend for open-air cases where all of the various components and cooling lines are attached to a single panel. This one combines a stark white color scheme with dark purple coolant and water blocks to great effect.

This tiny PC is built into the back wall of a common plastic hamster cage, complete with climbing tunnels, observation ball, and toy hamster running on his wheel. It's cute and colorful, but closer inspection reveals the hamster's vacant stare, wires soldered into his brain and a patch of aluminum foil holding his tiny skull together. Forced to endlessly run, chained to the PC he is powering, the unwilling engine of his own enslavement.