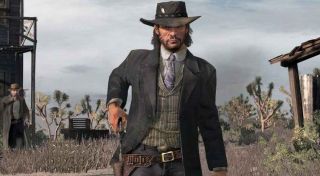 Over the weekend, a rumour popped up that claimed Rockstar was working on a remake of Red Dead Redemption for consoles and possibly PC, along with some Red Dead Redemption 2 DLC. It didn't gain a lot of traction on Reddit, but a few outlets did pick it up—unfortunately it's all nonsense.

It's not really a surprise. The Reddit user claimed they were friends with an environmental artist and said "all the new features" from Red Dead Redemption 2 would be imported to the remake, the map would be larger and new lines of dialogue had been recorded. Finally, they said it was due out late 2020, early 2021. As for the sequel DLC, there were less details, but the rumour suggested it would be alien-themed and you'd play as Arthur.

Essentially, Rockstar was apparently making a new game. Due out next year. Of all the Red Dead Redemption rumours, it seemed the least likely. And today the Reddit user has come clean.

"There is no dlc for Red Dead Redemption 2 or remake of the first game as far as I know," they admitted in a new Reddit post, before explaining their bold and ambitious plan to lie on the internet.

"This was an experiment I have always wanted to do regarding the spreading of rumors in video game culture. I’ve been thinking about this for a while and wondering how I was going to do it, then I saw red dead online was basically being ignored (most likely not, but the fans are in the dust about it, including me) so this was basically a good starting point for me."

After a few sites covered the rumour, the poster decided that they didn't want to trick people and opted to confess. Calling it an experiment is quite the stretch, but they reckon they've learned something from it: "I learned that some people will believe anything that someone says if it sounds believable". That's true, I guess, but in this case it was probably SEO rather than gullibility that spread the rumour.