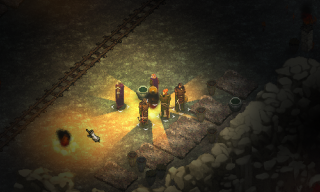 One of the bullet pointy inter-titles in the above, new trailer promises that you can "fill your satchel with interactive items", which is how you know we're in old-fashioned PC RPG territory. Serpent in the Staglands is a retro-flavoured, party-based RPG that raised some money on the Kickstarters last year. Rather than merely paying lip service to the classics, it really bloody looks the part, with scrumptious pixel art and interface elements that would look right at home in some obscure German RPG on GOG. (Specifically, Darklands, from which devs Whalenought Games appear to have taken a healthy dose of inspiration.)

I'm going to quote a massive block of text from the website now, because it will be music to the ears of every RPG fan over the age of 30. (And to some of you youngsters, of course.)

"A campaign within the world of Vol, a fully realized setting inspired by the late bronze age in a Transylvanian landscape, with unique politics, races and gods steeped in history. Featuring a chosen party of five, you take the role of Necholai, a minor god of a celestial body, who descends to the Staglands for a moonlit festival only to find his way home blocked and immortality slipping out of his grasp. Seeking answers and aid, he takes on a mortal body and the guise of a traveling Spicer.

"While the game rolls the dice for you, you'll traverse the Staglands on a path narrated by your own wits and choices. A true role-playing experience, Serpent in the Staglands offers no auto-populating map markers, checklist quest grinding and rigid story exposition.

"Examine hand-drawn maps in your inventory for secret locations, diagrams of foreign languages, note encounters of interest in your in-game journal and figure out on your own how best to smuggle Spices. Above all else, you'll be rewarded for roleplaying."

Man, cumin must be really big in Transylvania.

There's a bunch of cryptic runes at the end of the trailer, which have already been translated by smart people to give a release date of May 28th 2015. That's not very far away at all, and though it conflicts a bit with Pillars of Eternity, I'm willing to heroically divide my time between two great-looking RPGs. Might have to cut back on the old sleep though.