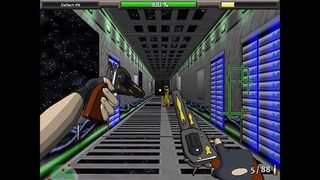 Rogue Shooter tells you exactly what it's supposed to be. An upcoming roguelike indie FPS set on a space station with 200 floors and an infestation of aliens, murderous robots, and giant flesh-eating plants, the single-player game is currently looking for advancement as part of Steam's Greenlight process .

In accordance with its roguelike DNA, each space station level is randomly generated. Your character can also pick a backstory for each playthrough, add ability-boosting perks, and scrounge for more items and weapons as you make progress through the game. THe developers at Hippomancer have created batches of weapons, including something terrifying called a Shotgun Trident. There are also some more familiar elements, like permadeath, vending machines that dish out ammo, and mini-games to hack into secure computers on the mysterious space station.

Rogue Shooter is set for release in November, according to its Greenlight description. Check out the game's second, somewhat calmer trailer below for more footage.