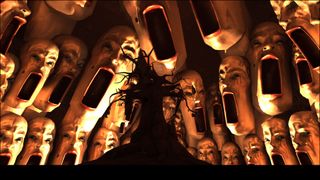 Nevermind is a first-person horror adventure with a legitimately intriguing hook: It uses biofeedback sensors to measure your stress levels, then adjusts the difficulty accordingly. If you're able to stay calm and cool, you'll have a relatively smooth ride, but if you flip your lid, you'll suffer for it. It actually tanked rather badly in its first run at Kickstarter in early 2014, but a second, lower-budget campaign later in the year was successful, and now it's been released to the public on Steam Early Access.

As "Neuroprobers," Nevermind players enter the minds of people who have suffered terrible psychological trauma, and set about exploring "the darkest and most surreal corners of their subconscious" in order to help them heal. It's not a hard-driving horror game like Amnesia: The Dark Descent or Outlast—the Kickstarter describes it as "an adventure game (in the spirit of classic games like Myst)"—but even so, it's clearly not going to be the most pleasant experience imaginable.

Making matters worse is the possibility that the game will be able to tell that you're suffering, and then turn the screws tighter. Nevermind supports a number of biofeedback sensors, and will adjust the difficult based on your responses. But don't think that means it will ease up if you start to completely freak out, because it actually works the opposite way: The worse you feel, the harder it gets. The hardware isn't cheap though—the lowest-priced unit is $75, and they run as high as $1400. Fortunately, the game is perfectly playable without one, although it doesn't sound like there's a whole lot to play just yet.

"Nevermind has been in full development for 8 months, enabling us to create enough content to demonstrate a variety of levels that demonstrate the full potential for Nevermind as a unique, biofeedback-enhanced adventure-horror game experience," the Early Access page states. "We want to give our community the opportunity to experience the game in its work-in-progress state so that we can hear what works and what doesn’t to make Nevermind the best game it can be based on your feedback."

Nevermind currently has enough funding to support the development of three levels, but the creators say they hope the Early Access release will allow them to expand beyond that. They're currently aiming for a full release in November.