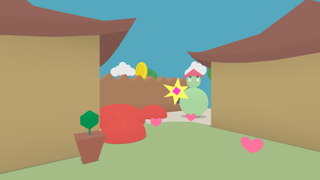 In an effort to be mildly confusing, the sequel to 2014's Lovely Planet (one of my favorite games of that year) will be called Lovely Planet Arcade. But it's not the same game repackaged as a downloadable Xbox 360 game, which is sort of what it sounds like—it's truly a new game.

Back in October, we learned that creator Vidhvat Madan is ditching the y-axis in the sequel for a new style of hyper-precise speedrunning, and that's reinforced by today's press release: no looking up or down. Also new are mirror and fast mode modifiers—as if Lovely Planet wasn't hard enough—and something about collecting evidence to "uncover the mysteries of the Arcade." But the y-axis change is the really interesting choice.

Lovely Planet Arcade will be playable at PAX South at the end of this month, and out on Steam in the summer. Until then, we have the strange, loud teaser above to enjoy.