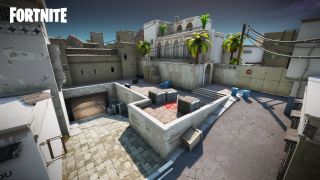 A team has recreated Counter-Strikes Dust 2 map in Fortnite.

Team Evolve, a collective of players who create and share impressive maps using Fortnite's in-game Creative mode, showed off its remake of Dust 2 on Twitter. It's eerie how similar it is; I wouldn't have realised it wasn't Counter-Strike if it wasn't for those radioactively green trees. The architecture, the colours and the general grunginess of it all are spot-on.

Team Evolve is a team who makes "content in Fortnite Creative mode for the most iconic brands in the world". I had no idea custom maps in Fortnite were so lucrative, but according to its website, it has worked with companies like Samsung, Nickolodeon and even the International Committee of the Red Cross. Fortnite maps and sponsored game modes are big money, apparently.

Dust 2 will be coming to Fortnite through the Battle Lab feature. Introduced in December, Battle Lab essentially opened up the game's battle royale mode to custom maps made in Creative. Assuming you have the code for it—which Evolve will be releasing soon through its Twitter—you can play a Battle Lab creation with up to 15 friends, or you can hope to find it in public matchmaking.

Or… you could just hop in CS:GO and find a 24/7 Dust 2 server somewhere. That would work just as well.