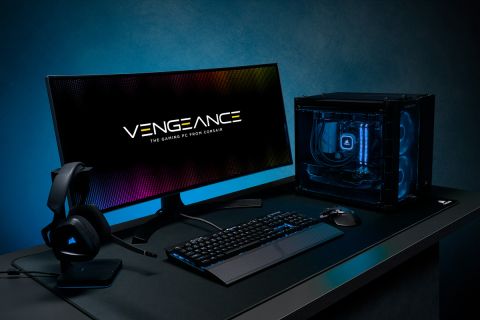 It's tough to find anything wrong with the Vengeance 6182. The build-quality and components are on-point for the price. If anything, the pricing scheme for the new models is the strangest part, but we're just being nitpicky.

Corsair has returned with two new additions to its Vengeance line of gaming desktops PCs, the 6180 and 6182—and they are both AMD builds. A build of this caliber, and at a reasonable $1,899 and $1,999, respectively, they are contenders in the best gaming PC space.

It's not often an all-AMD rig comes across our desks, and only since the 2018 release of the 2nd-gen Ryzen processors has AMD gained some serious hardware clout. But it's the 3rd-gen Ryzen processors and 5700-series graphics cards that have finally given gamers real choices when it comes to high-end power. These new Vengeance PCs are just the first in what could grow into a healthy ecosystem of AMD-based builds—and Corsair does everything right with them.

There isn't much difference between the 6180 and 6182 models, so while we've reviewed the 6182 here, you can safely expect the same performance between the two. The only differences are the motherboards and SSD. The 6180 comes with a B540 chipset and 460GB of SSD space, while the 6182 comes with a X570 chipset and 1TB of SSD space. The rest of the specifications are the same—plus or minus a few USB ports.

The Vengeance 6182 houses all the components in the Crystal Series 280X RGB case, which Origin PC is also using for its Big O. The dual-chamber case showcases the GPU, RAM, and the other more flashy components on the tempered glass side with such clarity that you can't help but be drawn in by the RGB lighting reflecting off the components. The opaque side houses the PSU and other non-eye candy components.

There are no changes in the case design, but compared to the Vengeance 5180, a 2018 model, the airflow in the 6182 seemed better than I remember it. It could be something as simple as a change in fans or a different PSU that helped do the trick, but it didn't hum as loudly while idling. Running at an average idle temperature of 45 degrees Celsius, the 6182 was dead-silent, unlike the 5180.

Compared to the previous generation 5180, which included an Intel Core i7-8700 and an RTX 2080 (and was $400 more at release), Corsair's newest AMD Vengeance 6182 performs near or on-par in both synthetic and in-game benchmarks. Multi-core and single core CineBench scores for the AMD Ryzen 7 3700X topped out at 2049 and 198, respectively (without an overclock). 3DMark scores for the RX 5700 XT were lower than the RTX 2080, so no surprise there—about 100 points lower at a 1440p resolution and 300 lower at 4K—but actual in-game performance was more evenly matched.

Also, not only are you getting a better motherboard and SSD storage in the 6182 compared to the 6180, but you're getting faster RAM than the 5182 at the same price—though really that doesn't matter if you're not overclocking it. The 5181, which has a larger SSD than the 5182 and 6180 but no secondary storage, is just $100 cheaper than the other three.

It's worth noting that the Vengeance 6182 is only available from Corsair's website. The 6180 and 5182 models you can find on Amazon. And as usual with pre-builts you can build your own PC with the same parts for a few hundred dollars less, but of course that doesn't include the cost of someone building it for you, or the two year warranty. Strange pricing scheme aside, there aren't any glaring flaws with the Vengeance 6182 gaming desktop. It's compact. It's quiet, even when under stress. It's a competitively priced high-end rig that's uniquely good-looking.

If ray-tracing is something you have to have, you're probably going to go with the 5182 model for the same price, but you'll be sacrificing faster RAM, a faster and larger SSD, and a better motherboard for something that will only give you decent framerates at 1080p on ultra—whereas the 6182 performs comfortably on ultra at 1080p and 1440p. The RTX 2070 Super is a 'better' card than the RX 5700 XT, but only 6 percent faster. The Vengeance 6182 is a smart, overclockable investment when you take into account the full specs. Upgrade the graphics card in a couple years, and the rest of the system should still be going strong.

It's tough to find anything wrong with the Vengeance 6182. The build-quality and components are on-point for the price. If anything, the pricing scheme for the new models is the strangest part, but we're just being nitpicky.