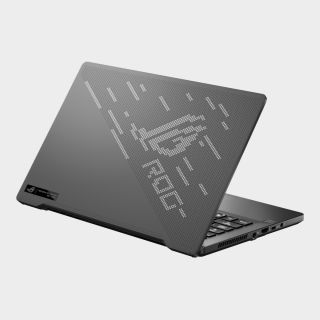 If you have a box of surprises and want to unleash them all at once, CES is a great time to do just that. Today Asus unveiled new laptops, desktops, monitors, and mice, and perhaps the biggest announcement came out of AMD's press conference: the ultra-slim Zephyrus G14 and G15 gaming laptops, only available with AMD Ryzen 4800U 8-core/16-thread processors.

Both models are designed with gaming and media production in mind. The Zephyrus G14 is super lightweight, only 1.6 kg, and has a chassis that's 17.9mm thin. Cosmetically, its stand-out feature is the programmable LED dot matrix on the lid, or what Asus calls an AniMe Matrix. (Only available on select models.) The desk is also fingerprint-resistant, apparently. The G15 is slightly larger at 19.9mm and 2.1 kg, and forgoes the RGB lighting for simple, white backlighting.

The G14 and G15 feature a "one of a kind cooling design," claims Asus. The G14 has an ErgoLift hinge, which tilts the keyboard at a more comfortable angle and lifts the bottom of the display up at the back to give the vents more room to breathe. Asus also touts 'self-cleaning' cooling on the G14 to help reduce dust and dirt build-up. The G15 has the same thing, but with some extra tweaking that "improves airflow by 17 percent." Availability for the Zephyrus G14 and G15 is Q1/Q2 of 2020.

Whatever the end-configuration, all are housed in new cases that keep some of the same ascetics from the ROG Strix GL12CX, like the rainbow stripe cutting through the middle diagonally. The "wind shear design on the GA35 and GT35 features widened air vents that help draw more air through the internal cooling system," says Asus. The CPU, GPU, and power supply are also separated by "three internal chambers" to "minimize thermal interference." The GA15 and GT15 have something similar, albeit with a more compact dual-chamber design.

Asus also had some new peripherals to show off: two monitors and a mouse. We've covered the ROG swift 360Hz gaming monitor previously, but Asus also showed off the new ROG Swift PG32UQX, which is a 32-inch 4K display with up to a 144Hz refresh rate. It can reach a peak brightness of 1400 nits, and is G-Sync Ultimate certified.

The ROG Strix Impact wireless gaming mouse has a 16,000 dpi senor that Asus says has more than 2.5-times the wired model’s maximum sensitivity with 400 inch-per-second accuracy; players can move the mouse faster than before while keeping tight precision.

No launch date nor pricing has been confirmed at this time. We'll put some of this gear to the test when it's available.