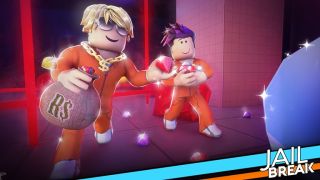 Roblox is a massively multiplayer online game and also a set of tools for making and sharing simple games, and within its demographic of young children it's more popular than pretty much anything else—maybe even Minecraft. According to the latest Roblox blog, it has 100 million active users every month. For comparison's sake, when Minecraft figures were last made public in March it had 91 million users (thanks for pointing that out, PCGamesN).

Popular games within Roblox include Jailbreak, in which some players are criminals trying to escape from prison and go on rampages like a low-poly GTA Online while other players act as the police. Since the "Robux" earned by creators in Roblox can be exchanged for real-world money, the designers of Jailbreak are now millionaires.

To celebrate hitting 100 million monthly users, Roblox is giving players a free accessory for their avatars—a pair of shoulderpads shaped like piles of gold bars.