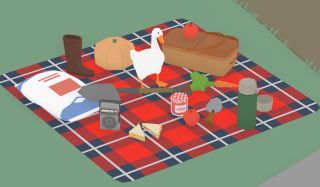 Christopher Livingston has been having a fun time being a total jerk in both Untitled Goose Game, in which you are a thieving stealth goose with a tactical honk, and Sea of Thieves, in which he's been murdering pirates to steal their treasure right at the moment they're about to trade it for cash. Just dastardly behavior. Bravo.

Daniella Lucas has been playing Final Fantasy 14, one of the few MMOs that's actually competing with WoW Classic to hold our attention these days. She's of the opinion that its new expansion Shadowbringers tells the best Final Fantasy story in decades, which explains why people are so happy to overlook its flaws.

Wes Fenlon has been playing Demon's Souls, the console-exclusive predecessor to the Dark Souls series. It's now playable at 60fps thanks to emulation and mods. If I had infinite free time this is what I'd be doing too, but even though I don't I'm glad things like this are possible.

Dominic Tarason has been playing Horace, a platformer about a deadpan robot that keeps changing genre as you play. The bastard-hard platformer with emotions remains a robust genre even today.

Steven Messner has been playing Crying Suns, which seems like a halfway point between FTL and Battlefleet Gothic: Armada—pausable space strategy where you've got both a crew and squadrons of fighters too keep alive as you ping around from system to system. If you wanted Subset Games to make a sequel to FTL instead of creating Into the Breach this seems like the next-best thing.

I'm still playing Borderlands 3 for my sins, and still finding shotguns to be the best weapons thanks both to their knockback and the fact I keep getting explosive ones. I did also find an SMG I could throw away instead of reloading, at which point it would race toward enemies then pop up a dome with the words SHOOT ME in red letters above it. Shooting that made it explode, of course.

But enough about us. What about you? Was anyone motivated to dive into the Batman series again thanks to the six freebies Epic gave away? Is anyone playing Klei's new game Hot Lava? Let us know!