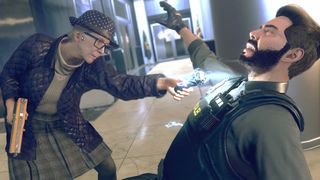 While Watch Dogs Legion is set in London, the capital doesn't exist in a vacuum, so what's going on in the rest of the rest of the UK? Well, it turns out that it's shrunk a little since Brexit. Yes, in Ubisoft's vision of the near future, Scotland is independent.

In a preview from The Guardian, Scotland's fate is mentioned, though given Ubisoft's appropriately gloomy view of what's ahead, I doubt untethering itself from the UK has allowed Scotland to avoid all the crises facing London. Watch Dogs isn't a very optimistic series. Until Ubisoft says otherwise, however, I'm going to choose to believe everything is smashing up here and we're all very content.

Creative director Clint Hocking reiterated that the team had been working on the game before the Brexit vote actually took place, then it "inherited" Brexit, turning it into a significant part of the open-world surveillance sandbox. So it also makes sense that an independent Scotland is part of the setting. The previous independence referendum would have still been fresh when Ubisoft kicked off Legion's development, and Brexit has only made the calls for a second one louder.

It's another tricky subject for a game that already seems laden with them. Surveillance, policing, Brexit, Scottish independence—they're all pretty sensitive and current topics. With the US being the de facto real-world setting of most western games, I'm not used to seeing the UK being dissected by designers—driving around Edinburgh in Forza Horizon was a trip—so I am simultaneously fascinated and uncomfortable.

One UK-specific detail is the treatment of firearms. 3D printing is the MacGuffin that allows Ubisoft to skirt the fact that guns are significantly less common in the UK and don't really have a place in the culture, but people will only use them as a last resort, and you can choose to not use them at all. Half of Watch Dogs Legion's weapons are non-lethal. Ubisoft didn't want to give guns to the police, either, and they don't need to be your enemies. Some cops could even be pro-DedSec.

It does sound like it's a bit of a departure from Chicago and San Francisco, and we'll see how much next year. Watch Dogs Legion is due out on March 6, 2020.