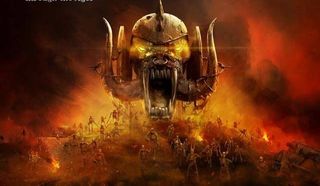 I saw Motörhead back in '88, I guess it was, during the Eat the Rich tour. They opened for Alice Cooper and, all due respect to Alice, absolutely blew him off the stage. It was pure, raging rock and roll of the sort that eschews more precise labels in favor of volume, speed, and hard-looking men in dirty denim. I don't recall much about the show, to be honest—1988 was so long ago—but I do remember that it was loud, it was awesome, and that not once did I think, "You know, this would make a really interesting foundation for a videogame expansion in, ooh, I dunno, 2015."

Someone at Haemimont Games did think that, however, and presumably shared the crazy idea with colleagues. And then, instead of laughing and moving on, they decided to go ahead and actually do it. "Motörhead Through the Ages," the upcoming—and, yes, official—expansion for the action-RPG Victor Vran, will feature a new storyline with new enemies, weapons, and skills, and will be "entirely Motörhead themed."

"Traverse war-torn landscapes and cities, Wild-West-inspired landscapes and the Dark Ages Castle where the Queen of the Damned resides, all heavily inspired by and based on Motörhead`s history, lyrics and general attitude," the announcement says. "Motörhead define the themes of the game as Victor faces evils relevant to our own world—religious fanatics, corrupt politicians and power-hungry oppressive rulers. During these quests he will be supported not only by the newly designed Motör-Weapons, -Powers and -Skills, but also a soundtrack with over a dozen tracks."

Sadly, there's no trailer or even a teaser video at this point, but Haemimont has released a few images that do a pretty decent job of setting the mood. Not familiar with Motörhead? I can help with that, too: The video at the bottom is from the early 80s, but trust me, nothing has changed.