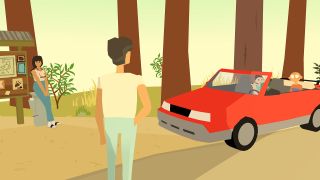 I never went camping as a kid, but playing Wide Ocean Big Jacket by Turnfollow is how I imagined it would be. The story follows an uncle and aunt taking their young niece and her boyfriend on a short camping trip. The family spends the night in the wilderness, having chats around the campfire, burning hotdogs, and telling scary ghost stories. It's an hour-long story filled with silly and earnest moments that would make anyone's heart pine for the outdoors.

It plays out through a compilation of moments over the course of the overnight trip that balances text conversations and exploration. Each scene you get to control a different character as they go about their campaign activities; setting up the tent, getting firewood, or having to face the wrath of the horrible teens whilst trying to get to the beach.

Instead of a dramatic sweeping story, Wide Ocean Big Jacket (WOBJ) focuses on small intimate moments between the characters. Like Turnfollow's other games, the stories have a thread of personal intimacy that creates a relaxing and cosy playing experience. The main story beats in WOBJ are fictional, but the overall feeling of independence and freedom came from Turnfollow co-founders Carter Lodwick and Ian Endsley's experiences.

"My mom, dad, sister, and I went camping pretty regularly growing up in Oregon," says Lodwick. "I feel like a lot of people characterize camping as this disastrous ordeal that a family suffers through, but I don’t remember it ever being that way on our trips. We had a big two-room tent, which appears more or less exactly as it was in the game."

"I have good memories of camping at the dunes in NW Indiana when I was a kid," says Endsley. "I remember camping with WOBJ's composer Scott when we were around 13 or 14 and he was playing his guitar at the campsite. We felt so cool. Going camping created a space for me to feel more independent than I ever had before and that's an important theme of the story."

The camping party is made up of the curious and hyperactive thirteen-year-old Mord, her cautious boyfriend Ben, the laid-back Uncle Brad, and Aunt Cloanne who just wants to smoke and birdwatch. It's the first time that the thirty-something-year-old adults have been entrusted with the responsibility of two pre-teens and Turnfollow uses the unusual group to create some goofy comedy, some heartfelt moments, and address themes of growing up.

"When we were going through some outlines for the story, I felt strongly about pushing us to work into something that was less traditional or familiar at face value," Endsley explains. "The Aunt/Uncle/Niece/Boyfriend dynamic really appealed to me because I couldn't think of any other comparable stories and it also had nice symmetry with the 'nuclear family'."

"It allows the two couples to be sort of sovereign from each other," says Lodwick. "Brad and Cloanne aren’t used to kids, so they’re not really in charge, at least not in the way that they would be by default if they were the parents. It lets the story be about two couples, and about relatives, but maybe not about a 'family' exactly. It’s kind of weird and specific in that way, especially because most people’s first reaction to it will be 'oh it’s an American family camping trip, I know what that is.' And playing it will probably upend those expectations immediately."

Through their time together, the two couples begin to have their own understandings of each other outside and inside their pair. When Ben expresses his nervousness about the dark, Brad lends him his industrial-strength torch, and the inquisitive Mord ends up having 'the talk' with Cloanne. The two couples have an effect on each other, the adolescents' openness and questions make Cloanne and Brad reflect on their own lives and, in-turn, Mord and Ben figuring out what it means to actually be in a relationship.

There's an honesty between the four characters that could only happen with this group dynamic. These moments aren't huge gestures, but smaller, gentle story beats that happen over the course of the game.

"When we were scoring the game, we were having these big freewheeling discussions about the story with our composer, Scott, after the major story beats were pretty much locked in. He said, 'I think after the game, Mord and Ben break up, and Brad and Cloanne stay together.' And I’m not saying that’s canon, but it was an astute evaluation of how relationships work, and what’s solid vs. what’s fleeting."

"A part of what helps me feel like I'm growing as a person is interrogating why my relationships have the form that they have," Endsley says. "The way that my parents acted, the ways that my first girlfriend and I navigated uncharted waters, the way that groups of teens treated me as I walked by—all of these things inform in some way how I understand my current life."

Wide Ocean Big Jacket is a funny and heartfelt story that touches upon the small, but important moments that make us who we are today. The game is available on Steam and on Itch.io.