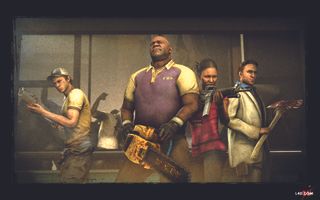 Find all previous editions of the PCG Q&A here. Some highlights:
- Has Half-Life: Alyx made you want to buy a VR headset?
- What's a game that handles politics well?
- Has a game ever made you rethink your moral code?

We've been having a look back at the last 10 years of PC gaming this week, with a series of retrospectives. Now it's time to ask: What were you playing in 2009?

It was a strong year for debuts of ongoing series, giving us Borderlands, Batman: Arkham Asylum, and Dragon Age: Origins, but there were plenty of big sequels too, like Dawn of War 2, Saints Row 2, and Call of Duty: Modern Warfare 2. Indie games were booming, with the PC release of Braid alongside the likes of Trine, Zeno Clash, Machinarium, Eufloria, and AaAaAA!!! – A Reckless Disregard for Gravity. PopCap gave us Plants vs. Zombies, and the Creative Assembly gave us Empire: Total War. It was also the year Minecraft was first released to the public.

Here's what we were playing. Let us know what you were up to in the comments.

In 2009 I was a junior/senior in highschool with a bad case of senioritis and lots of time for games. I'd recently built my first "gaming" PC (at the time gaming just meant it was mine, not that it was impressive) by Frankenstein-ing together my parents' used office computers. It was supposed to be for writing school papers on. I played a LOT of original Guild Wars on some 4:3 semi-flat screen monitor instead. I still had an Xbox 360 at the time where my friends and I played Halo 3 and GTA 4. That would also have been the year Dragon Age: Origins game out and turned me into the RPG freak I am today.

2009 marked the end of my LAN years, filled out with a lot of the original DotA mod, Quake and Unreal, Halo CE, and Team Fortress 2. Left 4 Dead 2 was probably my favorite game that year though. Hard Rain's progressively darkening neighborhoods with hordes obscured by rain and signalled by flashes of lightning; the transition from Blood Harvest's narrow train sequence to the wide open fields of corn; the badass Midnight Rider rock show finale of Dark Carnival—Left 4 Dead 2 is just a string of amazing moods and themes and level design that renew themselves with every run. A long tail of DLC and endless mods have made it a game I'll never forget, and it's just as fun to play today as it was then. I wouldn't be mad about another, though.

2009 was my final semester of college, so by that point gaming had fallen by the wayside so I could focus on my studies and work. I was also in or running a lot of school plays; anyone who has uttered the phrase 'I have tech rehearsal' knows how much time that takes up. And then I was working at a summer camp on a mountain, so there was no time for games still, not to mention barely an internet connection. But it was the summer that my former The Matrix Online guild came back together in preparation for Star Wars: The Old Republic. I hadn't gamed with or spoken to many of them since The Matrix Online shut down.

It wasn't until the end of August, when I moved back home and faced the reality of job hunting, student loan debt, and an economic recession, that I got back into gaming. Sims 3, Borderlands, Left 4 Dead 2, and Team Fortress 2 defined the final months of 2009 for me, as they helped mitigate one of the most depressing times in my life. Borderlands, Left 4 Dead 2, and Team Fortress 2 made me fall in love with FPSes all over again. Borderlands drew me in with its art-style and punchy dialogue, not to mention I fell in love with playing as Lilith. Left 4 Dead 2 came out at the height of my zombie lore obsession, and Team Fortress 2 introduced me to multiplayer, team-based FPSes. The Sims 3—well, ten years later I'm still creating questionable scenarios and experiments all in the name of macabre humor.

I played a ton of Batman: Arkham Asylum, which felt like a revelation with its slick, reactive melee combat system. It's the first game I can recall that really made me feel like a superhero. I don't remember if I ever finished Assassin's Creed 2, but I played a ton of it—it was a great game that brought us the fantastic character of Ezio and, unfortunately, also brought us Uplay. I was supremely doubtful a first-person parkour game would work but Mirror's Edge just about pulled it off. I don't think I played nearly as much Left 4 Dead 2 as I did of the original, because it just felt kinda same-y to me, and I never quite got why people raved about Peggle all that much. Still, it was a pretty spectacular year for games.

I never played Braid. Is that a bad thing?

I had a gaming PC in 2009, but I think I was still spending more time gaming on the Xbox 360 and Wii back then. Halo 3 was probably still in my regular rotation, and ODST came out that year, too. On the PC, I sadly bounced off C&C Red Alert 3. It just didn't feel right, and my expectations were set high after the fantastic C&C 3. The big game that year for me was probably Resident Evil 5—it was certainly no RE4, but that campaign was a blast in co-op, and I played through it twice back-to-back and spent plenty of time in the Mercenaries mode, too. Most of my memories of 2009 are now rooted in what I played with friends. We puzzle-solved our way through Braid together and spent at least an hour figuring out how to get one of its super-secret stars, and we spent an entire weekend taking turns destroying mars in Red Faction: Guerrilla.

That December, I remember my roommate and I playing through the underrated horror game Silent Hill: Shattered Memories for the Wii in one sitting before devoting a good chunk of the holiday break to Assassin's Creed 2. Now that was a hell of a game.

I played loads of Call of Duty: Modern Warfare 2 and Street Fighter 4. I was especially obsessed with the latter, because I've always been a fighting game scrub and around that time I decided to dedicate myself to getting good instead of getting endlessly stomped by my friends. After a while I had decent Cammy skills, but I never got good and if I won, it was 90 percent luck. After I 'beat' the best player I knew—I'm convinced he threw the fight to get me to stop challenging him—I put Street Fighter aside. We aren't all meant for fighting game glory.

Not much from 2009 stands out in my memory, but my number one game would've been Dragon Age: Origins. I had high hopes for a return to a Baldur's Gate style of RPG, with a greater focus on characters and story than Neverwinter Nights provided, particularly given the promise of grim, ugly game world that evoked memories of The Witcher. Alas, it was not to be: It was a reasonably fine game, I played from start to finish, and in the years that have passed since it ended I've never gone back. Overall, a pretty unremarkable year.

In 2009 I was living in a cheap sharehouse I couldn't afford to move out of even though my housemates were incredibly noisy, partied constantly, and once started a fire on the balcony while drunk which I had to put out. It was a bad time, but I had an old PC that could run Diablo, System Shock 2, and AudioSurf so whenever I wanted to shut their noise out I put my headphones on and disappeared into those games for hours.

At the end of that year I got a new job and moved out, then started catching up on all the cool games I missed, like Saints Row 2 and Arkham Asylum. But I'm still grateful to Diablo for being so good at absorbing my attention, it helped me through a real shitty situation.