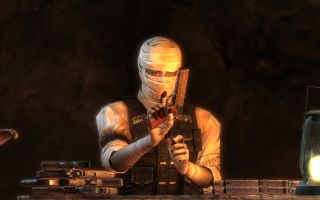 Find all previous editions of the PCG Q&A here. Some highlights:
- Has Half-Life: Alyx made you want to buy a VR headset?
- What's the best prison escape in a game?
- Has a game ever made you rethink your moral code?

There are plenty of examples of government sims that turn politics into game mechanics—Democracy, Crusader Kings 2, whichever one of the Tropico series is the good one. If you want to govern, games have you covered.

Politics is about who has power, and how much, and over who. So politics in games can go beyond the simulation of diplomacy and decision-making to also investigate how the balance of power affects the lives of our characters in other genres, whether it's imaginary factions they choose to support or their communities telling them how to live.

From Fallout: New Vegas to Life is Strange, the fingerprints of politics are all over games. Which brings us to our weekend question: What's a game that handles politics well? Here are some of our answers.

It's not hard to draw parallels between our world today and The Outer Worlds, in which the government and corporations have essentially fused into a single entity and where profit is its sole motive. And that's precisely why the game didn't need to be heavy-handed with long, drawn out lectures or big "Do you get it?" moments. The political themes are perfectly recognizable and they don't require a big red flashing sign. It's also breezy and light-hearted, never taking itself too seriously, making it easy to enjoy it as just a game filled with good guys and bad guys and plenty of people in between, and leaving the option to reflect on any of it up to you rather than pinning you to a wall and screaming "Reflect on this, damn you!" in your face.

In retrospect, a lot of Dragon Age's broad political allegories are a bit uncomfortable—white elves as stand-in for real-world oppressed ethnic minorities isn't great, even if BioWare are hardly the only ones to do it, and similarly there's something iffy about mages representing people who are discriminated against for being born different, while also being genuinely horrifically dangerous to be around.

But I think what the game does very well is to create a tangle of fantasy culture that's believable enough to get you questioning what your core politics are. What's more important, freedom or safety? Is violent progress better than a suffocating status quo? Can historical injustice justify present day revenge?

Every choice you make has its positive and negative consequences, some obvious and some unexpected. But crucially, unlike many of the games that have followed it, it doesn't simply treat every option as equally horrible. By the end of the game, the world is still kind of a mess, but you're left feeling like you at least nudged it a little towards your vision for how it could be better.

I'm going to make an off-the-wall more lighthearted choice here. Reigns: Her Majesty is the kingdom management game that started on mobile where you swipe left and right Tinder-style to approve or deny silly proposals from the advisers and locals in your kingdom. It doesn't tackle politics in the way people usually think where "politics" is just a proxy for "social values" and instead it handles the activity of politicking. Reigns: Her Majesty requires that you keep all four attributes of your kingdom in balance: religion, popularity, strength, and treasury. Every answer you give to one of your peons will affect one or more of those values. If any attribute reaches maximum or minimum value, you die in some horrific way.

In R:HM I have no real values. My only value is survival which means that I might love or hate the church at any given moment depending on whether my piety rating is looking too high or low. And then there's the meta game! Every time you die in R:HM you're reincarnated as a new queen and certain game objectives require that you perform specific feats or sequences to unlock items or achievements during a lifetime. Sometimes I want to die as quickly as possible just to get to my next incarnation. R:HM is the real political game. It's about tossing your beliefs in the bin so you can stay in power as long as possible. Oh no, that doesn't sound so lighthearted after all.

Papers, Please is great for a whole bunch of reasons, but its neatest trick is its critical look at oppressive regimes through the lens of an average citizen. Your character just wants food for his family and heat on a cold night. It's a fascinating look at rule-breaking in the workplace and loyalty to your country. I can keep a tidy record and make a consistent wage, or let my moral compass guide me to near ruin. So much is said in a relatively brief playthrough, so I encourage folks to give it a try if you've dodged it all these years.

Andy Chalk: Wolfenstein (the new ones)

It's heavy-handed, but I really love the way MachineGames enthusiastically waves the anti-Nazi banner in its Wolfenstein games. Enemy soldiers in pre-New Order games were very generic bad guys, like faceless Star Wars stormtroopers: Nazi, but not notably so. In New Order, New Colossus, and Youngblood, though, they're 100 percent irredeemable asshole Nazis, and it is our great pleasure to viciously stomp their guts out wherever and whenever we see them—and when we don't see them, to actively seek them out for the much-needed killing they deserve.

There's no allegory here, or thinly-veiled facsimile for the various horrors we've inflicted upon our fellow humans over the centuries. It's a simple, stark line in the sand between right and wrong, good and bad, basic human decency and an evil so pervasive and sickening that it needs to be extirpated, mercilessly and with violent excess, wherever it's encountered. Yeah, fine, Jess exhorting Soph to "slaughter those Nazi pigs" isn't exactly a sophisticated take, but in this time of equivocation, revisionism, and sheer wilful ignorance, it's damn refreshing to jump into a game that puts the boot where it belongs.

What with the talking skills and hallucinations and philosophizing in Disco Elysium, you may not notice at first that it's taking note of your choices and judging your politics. Eventually your broken brain straight-up says "Hi, I've noticed a tendency toward one of four broad ideologies" and offers to help you build an amnesiac's idea of political consciousness. It's another way to define yourself and how you fit into Revachol, and some of the game's funniest writing is its wry summaries of complicated beliefs.

Politics aren't just inside your head, of course. They're everywhere in a city scarred by a revolution and the war that followed it, where old men repeat old arguments about who was right and bullets from firing squads are still lodged in the walls. The revolution overthrew the royalists but was then defeated in turn by a coalition of moralist foreign powers who transformed Revachol into a non-threatening capitalist interzone shackled with national debt through the medium of intense bombing.

I responded to this by becoming a gigantic communist. Disco Elysium let me, and that rules.