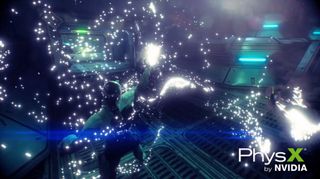 Digital Extremes isn't just working on naked space dinos. It's also busy with bringing us armored space cyborg ninjas in Warframe, its co-op third-person shooter showing up later this year. It hit open beta earlier this week, and Nvidia has shared a tech trailer showing off the slick PhysX effects owners of its cards can glimpse while cartwheeling off walls and stabbing things with nano-swords.

Warframe is all about cutting up and shooting cyborg soldiers before they do the same to you, so expect swarms of extra particle effects given off by sparking electronics and flame embers. It should result in some theatric clashes between the Tenno and Grineer factions (yeah, I don't know about the names either) just begging for slow-mo and one of those immortal John Woo doves.

You can sign up for Warframe's open beta on its official website , and Nvidia's article has more techy talk on the game's PhysX support.