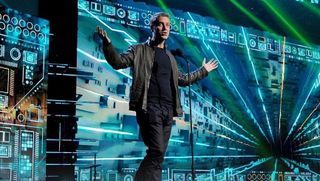 The Game Awards are kind of like the Super Bowl, in that we are nominally there to watch the event but the advertisements are what we're really paying attention to. That's not necessarily a bad thing, particularly when it comes to TGAs, because so many of the ads are announcements for brand new games, which are (sometimes, at least) legitimately exciting and informative.

More than ten new games were unveiled during the 2018 Game Awards show, and founder and host Geoff Keighley said today that more reveals will take place at this year's event, which will happen on December 12.

"This year's show will celebrate the act of creation, as I turn the stage over to a group of visionary teams selected to share their new products with you," Keighley tweeted. "I'm honored to be given this platform to celebrate our shared passion on a global scale. You'll hear much more in the coming weeks about our plans for the 5th anniversary show. It will be very special."

For those who are going to be in Los Angeles on December 12 and would like to attend live, tickets to the show at the Microsoft Theater are on sale now at prices ranging from $70 to $200. Keighley's full, somewhat more florid announcement is yours to enjoy below.