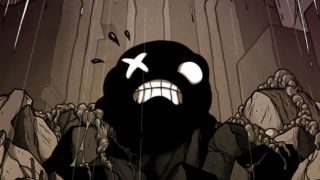 Thursday is upon us, and that means it's time to once again turn our eyes to the Epic Games Store, where a pair of new games have gone free for the week. First up is The End is Nigh, an action-platformer by Edmund McMillen and Tyler Glaiel, in which you'll die a lot, "but that's okay because you are probably already dead anyway."

The End is Nigh is a game about Ash, a survivor of some world-ending event who "flops his way through a future of pain and suffering," as the game listing puts it. "Feel his stress levels rise as you throw him into an endless swarm of decaying, mutant animal-like creatures and help aid his final epic quest... to simply make a friend (out of pieces of people he finds along his journey)."

That lovely-sounding concept is backed by more than 600 levels, 12 chapters, collectible tumors, and—somewhat oddly for a pixel platformer—an M-rating, for strong language. Epic is also giving away Abzu, a beautiful and less death-focused underwater exploration-adventure game.

"Linger in epic seascapes and explore aquatic ecosystems modeled with unprecedented detail. Descend into the heart of the ocean where ancient secrets lie forgotten," the store page says. "But beware, dangers lurk in the depths." Okay, so maybe there's some death. Even so, Abzu is rated E for everyone, and also excellent. That's not actually what the "E" stands for, but it is.

The End is Nigh and Abzu will be free until next Thursday, which according to my calendar is September 12. After that, we'll get the Lovecraft-inspired horror game Conarium, a tale of four scientists who decide to test the absolute limits of our perception of the world—you can probably guess how that goes.