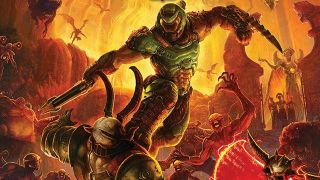 Except when a bunch of games are pushed from the end of one year to the beginning of the next, the winter release calendar can be a little light. But the slower pace gives us time to catch up on last year's best games, and it's not as if it's a complete doledrum: Pokémon-like MMO Temtem looks like a strong timekiller for cold winter nights, and Warcraft 3: Reforged will keep the nostalgic feelings simmering. There are a couple long-awaited games coming, too: Ori and the Will of the Wisps and Mount & Blade 2.

Plan your winter entertainment with the calendar below, which features the PC releases we're most looking forward to in January, February, and March, plus a glimpse at what April will look like (it'll be Cyberpunk 2077-free, I'm afraid, but that means we can take our time playing Resident Evil 3 Remake without a giant RPG competing for attention). For more, see our guide to all of the new games of 2020.

Release date: Out now
What is it? An action RPG retelling of the Dragon Ball Z saga, with side quests, fishing, and destructible battlefields to recreate the series' reckless battles—though I doubt they'll take as long as they did in the show.
Links: Steam, Humble

Release date: January 21 (Early Access)
What is it? It's a Pokémon MMO on PC, basically. Temtem (which are also the name of the world's creatures) can be caught, traded, bred, and thrust into battle as part of the solo or co-op story quests (the villain is Team Rocket analog Clan Belsoto) and against other players.
Links: Steam, Humble

The Walking Dead: Saints and Sinners

Release date: January 23
What is it? A VR-only survival game in which you work with or against NPC survivors and factions to save a zombie-infested, partially flooded New Orleans. The developer promises "gut-wrenching" choices. We'll see how it stacks up to other videogame attempts at The Walking Dead's 'but who are the real monsters here' themes.
Link: Steam, Humble

Release date: January 28
What is it? Journey to the Savage Planet looks No Man's Sky-ish, but takes place on one uncharted planet and is more adventure than survival, with support for two player co-op. Chris got a chance to play it last year, and ate a giant uvula out of a giant skull, if you want a sense of the tone.
Link: Epic Store

Release date: January 28
What is it? A remake of the RTS classic with new graphics, the Reign of Chaos and Frozen Throne campaigns, balance adjustments and modern multiplayer features, as well as custom games (which originally spawned the MOBA and tower defense genres) and an "upgraded" World Editor. There's a lot to be excited about, even if you never played the original—if the remake is any good, I'm fairly confident it'll hold up well, and it isn't as if we're drowning in other RTSes to play.
Link: Blizzard

Release date: February 4
What is it? A standalone sequel to the trilogy of Sniper Elite zombie spin-offs, with four player co-op. Your enemy is zombie Hitler and zombie Hitler's horde, which includes a zombie shark. It seems likely to be reasonably entertaining, based only on those facts and the quality of Sniper Elite 4, which was excellent.
Link: Epic Store, Humble

Release date: February 25
What is it? A collection which includes Mega Man Zero 1, 2, 3, and 4, Mega Man ZX, and Mega Man ZX Advent, with the option to play with filtered graphics (giving everything a softer, anti-aliased look) or the original pixel art, as well as mid-stage saving should you want to go a little easier on yourself.
Link: Steam, Humble

Release date: February 25
What is it? A co-op hack n' slash that was announced as an April Fools Joke, but perhaps predictably was always a real game.
Link: Steam

One Punch Man: A Hero Nobody Knows

Release date: February 27
What is it? If you truly don't know One Punch Man, his name is Saitama, and he can defeat any villain with one punch on account of his rigorous daily workout routine: 100 push-ups, 100 sit-ups, 100 squats, and a 10k run. How you develop a 3v3 fighting game around a character who cannot be defeated, I'm not sure, so I assume Saitama's power is tweaked a little so that he doesn't immediately punch everyone else into outer space.
Link: Bandai Namco

Ori and the Will of the Wisps

Release date: March 11
What is it? The sequel to 2015's Ori and the Blind Forest, a luminous and acrobatic exploration platformer with challenging bosses and a sentimental but nevertheless touching story. We've got high hopes for the sequel, which has been a long time coming.
Link: Steam

Release date: March 20
What is it? Hell on earth. The sequel to the excellent 2016 Doom reboot looks just about ideal from the trailers, which crank up the Doom Slayer's mythological status, relentless forward motion, and ability to pop demons like blisters. We've got high hopes for the continuation of perhaps the best reboot a series has ever gotten.
Link: Steam, Humble

Release date: March 20
What is it? As the name suggests, Doom 64 originally released for the Nintendo 64 and nowhere else. Finally, the 1997 sequel to Ultimate Doom will come to PC on Steam (there's no page up yet) at the same time as Doom Eternal, and it's free with a Doom Eternal pre-order.
Link: Bethesda

Release date: March (Early Access)
What is it? The long awaited sequel to medieval sandbox RPG Mount & Blade. A simulated feudal economy, diplomacy system, and massive offensive and defensive siege battles are just a few highlights of the open-ended roleplaying we've seen so far. We suspect we'll be playing this one for a very long time, especially because the engine tools will be released for modders.
Link: Steam

Release date: March 24
What is it? A multiplayer brawler from Hellblade and DMC: Devil May Cry developer Ninja Theory. It looks a bit like Team Fortress 2 or Overwatch, though with combat that's primarily focused on chaining melee attacks (there are ranged weapons, too). We played it back at E3 last year, and came away with chaotic, but promising memories.
Link: Steam, Microsoft (also coming to Xbox Game Pass)

Cyberpunk 2077 has been delayed until September, causing a 100 percent drop in Keanu Reeves levels for April, but there are some interesting games coming in the fourth month of the year. A few notables:

We'll lay out another release calendar closer to April, May, and June, when more release dates have solidified. For a bigger overview of the year, here's every PC game we expect to release before the end of 2020.