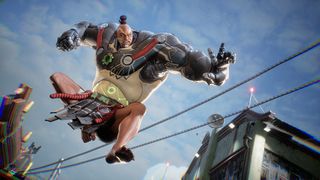 Officially unveiled at Microsoft's E3 press conference, Bleeding Edge is the next game from Hellblade developer Ninja Theory. It's a third-person brawler with a focus on melee combat, and a roster of heroes reminiscent of Overwatch and its many imitators. Does Ninja Theory's action game expertise help Bleeding Edge to stand out from the busy crowd? To find out, James, Samuel and Phil all played a round at the Xbox Showcase event.

James Davenport: How do we describe Bleeding Edge? I think calling it a melee action game and citing Ninja Theory’s DmC Devil May Cry is misleading. Melee factors in, but you’re not juggling opponents in prolonged combos or even engaging in intimate duels like you do in Ninja Theory’s more recent and restrained Hellblade. It’s a game that bridges the gap between a MOBA and Overwatch, focusing more on team compositions and tactical ability use than bashing one another’s heads in.

A basic overview before we dig in: Every character is assigned a class—assassin, support, or tank—basic melee or ranged attacks, a few special abilities that operate on a cooldown, and a super move that charges up over time. We played was a simple 4v4 control point mode on a three-laned map, and the action articulated as chaotic teamfights.

Samuel Roberts: I'll admit my first response to the trailer was 'ack, another game with these character designs'. I guess I mean that MOBA-ish grab bag of colourful characters with big personalities, which has become slightly tired to me in the years following Overwatch. And yes, based on one match, I too found it utterly chaotic. I see where careful strategies can come from. One heavy character has a grapple hook ability that drags an enemy in, which combined with AOE attacks from other teammates could end up being an effective strategy. Each character has a ground slam ability, which could result in some exciting jump-down assaults from parties onto populated control points.

In our game, though, everyone was kind of button-mashing in enclosed spaces. The support classes seem to give it a little more structure—healing and shield abilities help break up the action so not everyone is brawling at once. But even though I found that the melee attacks felt good, nothing in our match seemed to coalesce.

James: Yeah, whenever I thought I was going to set up a good play, I’d get hit by something from off-screen.

Phil Savage: After one round of Bleeding Edge, I've gained a new appreciation for how good Overwatch is at helping you parse its chaos. Not only was there a lot happening here, but there was very little feedback given about how much impact I was making. According to the end-of-match report, I got the most kills of anyone on our team. I didn't feel that while playing.

Samuel: Yeah, I got ten kills, and I only remember getting four of them.

Phil: I hit a couple of big ults as a heavy character, resulting in significant damage to the enemy team. I wish the game was a bit more "fuck yeah, you did that" about it.

James: The map we played wasn’t too inspiring either. It was just three lanes leading to each capture point with a few upper pathways accessible by jump pads to allow for flanking maneuvers. It meant our match was largely decided by which team had more players on a point.

Phil: I struggled a bit with the round structure, although I think that's more a lack of familiarity than a fundamental flaw. Our team proved pretty good at winning team fights, but were less successful at locking down multiple control points—a problem that was exacerbated by points periodically being locked out and resetting. Ultimately, it feels like my team lost because two of my teammates were more interested in hosting selfie videos about how they were playing Bleeding Edge than capping point C after it became available. In fairness, this is largely representative about how most objective-based multiplayer games play out when solo queueing.

Clearly there's a lot still that we're unsure of, although I have to admit even around my misgivings I still got into the competitive aspect and enjoyed trying to win the big teamfights. Was there anything else that you particularly liked or thought showed promise?

James: Unlike Sam, I dig the character designs. Maeve is a creepy older woman with a bony arm designed to harass. She can trap enemy players in a big bird cage, which is an eccentric, satisfying move. Zero Cool looks like a smug Twitch streamer that floats around in a chair and tinkers around on his phone all the while. I spent most of my session as Buttercup, whose legs have been replaced with a massive rubber wheel. She can fall forward and uses her sawblade as an improvised front wheel to become a human motorcycle. It’s stupid, and I like stupid.

Melee attacks and abilities animate well and feel good, too. With more experience and improvements to feedback that allow for better awareness in fights, there could be something to Bleeding Edge’s combat we’re just not seeing yet.

Phil: Yes, the bird cage was a nice effect. I get the sense that Bleeding Edge's best abilities—the bird cage, the hook—are all things designed to lockdown or reposition the enemy. Even my team, with its complete lack of teamwork or effective communication, was able to pull off some cool synergies with relative ease.

I don't feel comfortable making too definitive a judgement without playing using keyboard and mouse. The controller layout for abilities was buck wild, and made it much harder to judge what I was doing in the moment—let alone what anyone else was trying to achieve.

James: We must play things on the computer. This is our curse.

Samuel: Even though the overall style of character designs feels tired to me, this is a very good version of that, and the characters do feel meaningfully different from each other. I focused on Bastardo and Buttercup, two of the heavy characters, and they had very little in common. Bastardo has a mean spinning melee attack that I'm pretty sure got me most of my kills, plus he can overcharge his health in the midst of battle. The supers are an interesting factor for each character too: most heroes seemed to have multiple supers to choose from, which suggests some flexibility in player approach.

I need to play this with a group of people who know what they're doing, and then I'm sure it'll feel more coherent. This sort of multiplayer experience is probably a good fit for Game Pass, where you can sample what it offers without feeling like you're risking $60 on there being long-term demand for it.