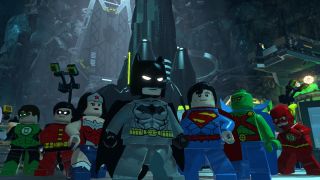 The Epic Game Store giveaways have been especially good lately, but today they're just spoiling us. Six whole Batman games split across two trilogies, free to snag here for the next week and keep forever. The complete Batman Arkham series, full of bone-crunching violence and rainy neon streets, and the more comedic and family-friendly Lego Batman series.

The Arkham trilogy by Rocksteady are all excellent third-person brawler adventures. Yes, even the third game, Arkham Knight, which has a bit of a bad rap. Even after a botched PC launch forced them to pull the game from sale for additional porting work, most gaming PCs at the time struggled to run Knight at a consistent 60fps at the time. Fortunately, most gaming PCs (even laptops) now have enough muscle to deliver a smooth and pin-sharp bat-experience, and it's still one of the prettiest games you can play on PC today.

Pro tip: Arkham Knight's default Batmobile driving controls are borderline nonsensical on gamepad, and you're stuck using them at first. This presents a problem, as you'll be spending a sizeable chunk of the game driving it. Fortunately, the moment you complete the Batmobile tutorial, a new line—"Battle Mode Toggle"— will appear in the options menu.

Flipping that switch completely changes the control layout to behave more like a traditional driving game (accelerate and brake with the shoulder buttons), which makes navigating around the city far easier. When you hit the button to transform into tank mode works, it more like a third-person shooter. I highly recommend doing this.

If the Arkham series is a bit grim for you, there's always the Lego Batman series, developed by TT Games. Perfect for playing co-op with younger relatives, or just goofing around in for the young-at-heart, as they're gleefully slapstick nonsense and lean into a lot of the weirder parts of Batman lore. You'll meet plenty of lesser-seen villains, and the third game has Batman fighting cosmic threats alongside the Justice League. Unlike the earlier Lego Star Wars games which pantomimed their way through every dramatic scene, this series is fully voiced. Sadly they couldn't rope in Mark Hamill as The Joker again, proving that there's no such thing as a perfect game.

You can grab the Batman games here on the Epic Games Store up until September 26th. It's worth noting that—while Arkham Asylum and Arkham City are the GOTY editions bundling all DLC—Arkham Knight's DLC is not only not in the bundle, but also not available through the Epic Games Store.

There's more to look forward to next week as well. If you tune in at the same Bat time, same Bat channel, Epic are giving away surreal cosmic oneness simulator Everything and claustrophobic and intense FPS Metro 2033 Redux, both of which contain bats of assorted sizes too.