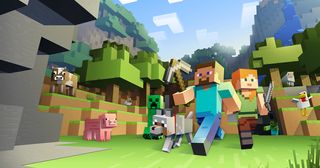 It's been more than a decade since players started building their first dirt hovels in Minecraft, and while most games wind down long before that, Mojang's sandbox has no problems with relevancy, even in the face of Fortnite's popularity. This year, it was the most watched game on YouTube, generating a ridiculous 100.2 billion views.

YouTube's 2019 Rewind video condenses the year into five minutes of clips from the year's most popular videos. It is spectacularly awful, but not quite as bad as 2019 itself. I wish the worst thing that happened this year was loads of people watching PewDiePie getting married. It also revealed the five most viewed games, all of them in the tens of billions.

Roblox videos got 29.6 billion views, followed by mobile battle royale Garena Free Fire with 29.9 billion, GTA 5 with 36.9 billion and Fortnite with 60.9 billion. So there's a 40 billion gap between Fortnite and Minecraft.

While battle royales, in particular Fortnite, as well as the stalwarts like Dota 2, CS:GO and League of Legends, dominate Twitch, YouTube has always been Minecraft's home. It's where a lot of people, myself included, first saw it, and it's responsible for countless YouTubers' careers. It's not a surprise that it's still thriving there, but 100 billion is still an absurd number.

In May, Microsoft boasted that Minecraft had sold 176 million copies across all platforms, making it the best-selling game ever, depending on how you count Tetris and its many versions.