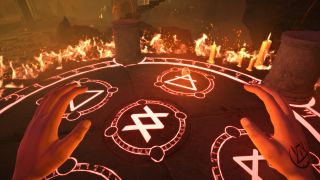 While Keep Talking and Nobody Explodes is a callback to the bomb defusal scenes in Lethal Weapon and Speed, Exorcise the Demons uses the same basic premise to recall the decidedly more occult Evil Dead films. It's a similar setup that has a player and their friends working together to stop something bad from happening, but this time around, you're trying to complete various rituals to communicate with and eventually banish horrible demons.

It's an asymmetric co-op game based on communication: only one player can see the game screen, while the others pore over a Book of Rituals to work out what the player needs to be doing. You'll have a variety of occult tools available, which include runes and Zodiac signs, a ouija stone, a summoning circle, and obviously lots of candles.

It's the kind of game that, had it existed in the '80s, I would definitely not have been allowed to play, which of course means that I'm itching to get my hands on it. Here's the trailer:

The brilliant part of these kinds of games is the natural comedy that's generated when people are made to figure out how to give directions with a time limit, becoming increasingly frustrated and therefore worse at giving level-headed directions. It's a pretext for yelling at your pals, this time with demons!

Exorcise the Demons comes out in September. You'll only need one copy of the game to play with friends, since you can send them a link to the Book of Rituals, or print out a copy if you want to play locally. You can find it over on Steam.