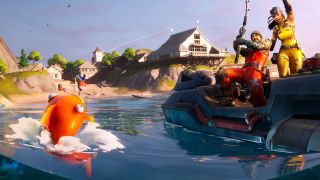 Update: Epic has clarified that, while an annual pass was at one point considered, there are currently no plans to launch one. The details dug up by dataminers were prototype features.

"We've seen discussions around a 2020 Annual Pass as a result of data mining the v11.30 build," Epic explained. "Occasionally prototype features make it into our build that end up not being released. While the 2020 Annual Pass was considered, we have no plans to release it...unlike the Bao Bros."

Original story: Epic Games is reportedly introducing a brand new battle pass to Fortnite called the 'Annual Pass.' This new pass grants access to all the 2020 battle passes and includes exclusive cosmetics, according to details uncovered in the files of Fortnite's v11.30 update that released Thursday morning. However, the price of the annual pass along with its release date has yet to be confirmed.

The leak, found by Lucas7yoshi, reveals a number of exclusive accessories, skins and emotes, including a polar bear with an eye patch and a missile launcher called Polar Patroler, an icy winged demon called Shiver, and a Christmas jumper wearing reindeer called Dolph.

The annual pass is likely to go on sale before the new year, and with Christmas just around the corner, a year's worth of battle passes is the perfect present for any Fortnite player.