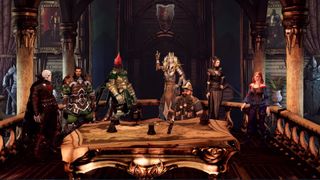 Not surprisingly, Divinity: Fallen Heroes is bringing back one of Original Sin's best combat features: surfaces. Poison, oil, water—the ground of the tactical spin-off is peppered with puddles with elemental and exotic properties that can be combined with spells, effects and actions to create unexpected combos. And it's adding a new one to the list.

Sulphurium is a volatile, explosive resource that, when spilled on the battlefield, presents both a deadly obstacle and a very handy tool.

"It's triggered by kinetic energy, and it causes an explosion with a shockwave," Larian's Swen Vincke explains. "So if you shoot a crossbow at it while you're on top of it, you can rocket jump. And if you time it right you can jump across multiple surfaces. If an enemy is nearby they'll be thrown back by the impact as you jump. It's a really cool systemic addition to the combat."

If you're not careful, however, sulphurium can also kill off your own units. Enemies will gladly push your warriors onto the nasty surface. It's not the sort of thing you want to fall on top of, as the landing will be accompanied by an explosion. Try to avoid standing above a puddle of the stuff.

Clearly it's not as safe as using a polymorph spell to give you wings or a teleport spell to send you across the map in a blink of an eye, but neither of them let you land in the middle of a group of enemies and send them flying back. It's a much better way to make an entrance.

Check out more of our interview with Vincke and get more details about Divinity: Fallen Heroes in the latest issue of the PC Gamer magazine, out this week.