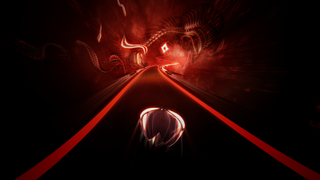 There's something primal and terrifying about Thumper's pulsating bass beats. It's like the unstoppable march of something deadly and dread-laden. It is, in other words, pretty damn cool.

The latest trailer, "Rhythm Violence," is a minute-long assault of colour, noise and foreboding. It follows the last trailer, "Kill Crakhed," which was pretty much also that.

In case it's not clear, I'm looking forward to Thumper. I played a bit of the IGF build, and I'd describe it as Audiosurf if Audiosurf didn't much like you. It's a rhythm game, in which you perform specific actions to the beat—but along an on-rails track that you're inescapably locked on to. Even the tutorial's droning, rolling beat felt like a simulated panic attack. Does that sounds bad? It isn't meant to. Rather, its tone and style is perfectly placed to enrapture those receptive to rhythm action games.

Thumper will be released "when it's finished".