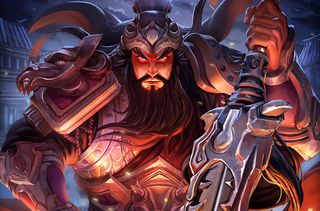 Chris Thursten: Smite. Smote? Smitten.
The Smite World Championship was the most I’ve enjoyed an e-sports event since the 2013 Dota 2 International. It’s so refreshing to encounter a competitive scene this positive, open, and with so many great narratives. I’ve become a bit of a Titan fanboy following their extraordinary rise from the Challenger League, but so many extraordinary teams took part. OMG, with the extraordinary timing against Titan; COG Red’s unparalleled aggression and style; COG Prime, of course, with their confident, tournament-conquering performance. I’ve spent the rest of the week working through post-tournament blues: I’d do it all again in a heartbeat.

I returned to the UK with a fresh desire to play the game myself, and I’m having a good time. Watching competitive Smite is actually a good way to pick up the macro-level knowledge needed to succeed at baby-level pub play, and for the most part I’ve found the community to be really friendly and positive. More than once, a solo game has ended with a round of friend requests and a desire to re-queue with the same people. That’s never happened to me in almost 2,000 hours of Dota 2. Also, I managed my first Fire Giant steal yesterday. Feels good, man.

Samuel Roberts: Saints Row can give you a great weekend
Saints Row IV for free this weekend is a spot-on choice if you have no plans and it’s raining outside all weekend (it sure as dick is here in the UK). Firstly, it’s brilliant fun and gets the tone just right, exorcising the last remaining lazy elements of Saints Row’s stupid heritage (The Third is where it started getting really good and properly funny.) Secondly, unlike a lot of free weekend games where the intention is that you’ll get hooked and buy the whole thing, I reckon you could clear Saints Row IV in a solid weekend and just have a great time doing it. I love Steam free weekends—one of my favourite things about playing on PC.

Tom Marks: There’s a storm brewin’
I dove into the closed beta of Heroes of the Storm this week and I’ve been having a blast. I played League of Legends for nearly three years before eventually getting burned out by the rage, ladder anxiety, and what felt like constant changes in how I was supposed to play. This isn’t saying I think League is bad; in fact, I think it’s great and I really value both the time I played it and what it’s done to grow e-sports. But boy is Heroes of the Storm relaxing in comparison.

I could easily see all the reasons I enjoy Heroes of the Storm being the same reasons someone with a background in League or Dota 2 thinks it’s garbage. It is absolutely a simplified MOBA—a diet MOBA—but it’s done so well. It’s similar to Hearthstone in that it’s deliberately simple, but they’ve made every interaction and animation so satisfying that it still pulls me in. There’s a distinct possibility that this will wear off and the same simplicity will fail to hold my attention, but right now it’s all I want to play.

Chris Livingston: Triple Dragon
Hi! I'm an old person. As such, I sometimes like to fondly reminisce about the early days of videogames while sitting in a creaky rocking chair and calling my caregiver by the wrong name. Naturally, I'm pleased to see the 1987 arcade classic Double Dragon and its two sequels available on Steam this week for a few bucks.

I realize there's a bit of danger to gaming nostalgia. The games I played as a kid probably aren't as great as I remember them because memory, at best, is iffy. For instance, there's a scene in the 1984 sci-fi show V, where an alien lady swallows a living cat. My memory of that scene is that it genuinely looked like an alien lady was swallowing a cat. It was upsetting to Young Me, because I was 12 and I liked cats and didn't like the idea of them being swallowed. Last year I watched the episode again, and wow. It does not match my memory. It's not even a cat, it's some kinda large rodent, and it's clearly just being stuffed into a giant plastic lady alien mouth. (The 2010 version, included in that clip, isn't much more convincing.)

Will I like Double Dragon as much as I remember? Probably not. Will I even play it for more than a few minutes? Probably not. Still, it's a thing I used to play! That I can play once again! Yeah, I'm too nostalgic, but at least I'm aware of it.

Wes Fenlon: The soul still burns in Dark Souls 2
The highs of my week this week are actually: 1) I survived CES last week. 2) I'm not at CES anymore! CES is an overwhelming show, and being around tens of thousands of people in Las Vegas tends to leave me sick and exhausted. But I dodged the sickness this year, and managed to enjoy some cool gaming news once I got back, namely just how substantial the free patch coming to Dark Souls 2 this year is.

The free patch is adding a new character and making new balance changes here and there, which I appreciate. But more importantly, it's adding an item that will absorb souls for you, so you can control your soul level and enjoy the PvP multiplayer at the level you want. That's a really cool idea. Many people love Dark Souls for many reasons, but its approach to online multiplayer is its most unique feature, and I love that the developers continue to support it, and breathe new life into it, nearly a year later. They've also added a way to see the most active areas of the game world, which will help the community quickly match up.

Phil Savage: Another final fantasy
I've got a new MMO to dive into this weekend! As mentioned in my recent news post on the subject, the revelation that Final Fantasy XIV is getting a Gold Saucer tribute act prompted three PC Gamer writers to insta-buy the game. As one of that trio, I now get to go exploring through a new world—a new set of systems. I love this stuff. As much as MMOs borrow from each other, all are slightly distinct. The excitement is in finding what makes each one stand out, and whether its unique points can make up for all the inevitable failings.

Even devoid of this anticipatory high, there's still the Gold Saucer. Chocobo racing could be cool, as long as its vastly improved over the FFVII version, but the thing I'm really looking forward to is Triple Triad. It was a great mini game in Final Fantasy VIII, and took up far more time than I'd care to admit. The idea of this nostalgic artefact being transported into the living world of a massively online game? Surely that's the thing a Final Fantasy MMO should aspire to.

Tom is PC Gamer’s Associate Editor. He enjoys platformers, puzzles and puzzle-platformers. He also enjoys talking about PC games, which he now no longer does alone. Tune in every Wednesday at 1pm Pacific on Twitch.tv/pcgamer to see Tom host The PC Gamer Show.