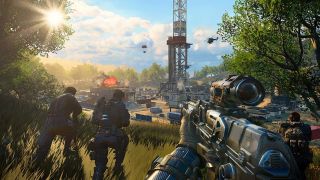 The US Army is hoping that esports, of all things, will encourage more young Americans to consider a career in the armed forces. It’s putting together its own esports team as part of the marketing initiative, sending them to tournaments where they can drum up awareness and make the Army seem more relatable.

During a Reddit AMA last week, the Army invited veterans, reservists and active members to sign up to be involved, though it clarifies that members of the actual esports team would need to have time left in the Army. “It is an All-Army team essentially,” explains SSG Meaux.

There will be other opportunities for veterans, and there’s also a form for people not in the Army linked in the AMA. Beta testing Army apps and training and simulation software is also mentioned as part of the team’s responsibilities. An Army esports Twitter was also set up, but it seems to have been suspended.

While the team won’t be Army recruiters, the US Army is also sending recruiters to esports tournaments. This recruitment drive was announced earlier in the year, when the Army was 6,500 soldiers short of its target for the year ending in September.

Both the Army and Air Force have delved into esports before. Across July and August, the Army hosted and livesteamed an esports qualifier for Street Fighter 5, while the Air Force worked with an esports team during the summer. Neither of them featured an all-military esports team, however, and this one will be the first.

The US military also works with game developers and publishers. Prolific strategy publisher Slitherine made a version of Command Modern Air/Naval Operations to be used as a training simulation. The Army even has its own official game series: America’s Army.

I’m not really sure how this will actually encourage new recruits. Would you be more interested in joining the Army just because some of your fellow soldiers also enjoy League of Legends? I don’t think we’re going to see a surge of gamers suddenly deciding to enlist.