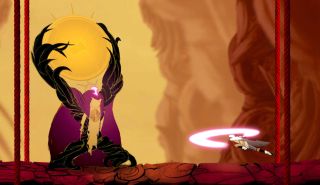 The Epic Games Store began giving away weekly free games in May to mark its first big sale, a process it extended in June to the end of 2019. It wrapped up the year in a big way, with 12 daily giveaways. Then 2020 rolled around, and we got three more free games.

And that's not the end of the ride either. Darksiders, Darksiders 2, and Steep are still free for now, but once January 9 arrives, Sundered: Eldritch Edition will take their place. Sundered is a hand-drawn Metroidvania developed by Jotun studio Thunder Lotus, in which players can either resist or embrace ancient Eldritch powers. That sort of thing rarely comes without a price, and, oh yes, here it is: "At the cost of your humanity."

Omelettes and eggs, I suppose. The Eldritch Edition includes local co-op support for up to four players, plus new areas to explore and a new quest chain with unique rewards and a brand-new boss, along with all the regular updates that have been released since Sundered launched.

Epic hasn't said yet what its long-term plan is—whether it intends to continue handing out games through some or all of 2020, or if this is just a bit of spillover bookkeeping. We'll let you know if and when it does, and for now, hey, it's another free game. Sundered: Eldritch Edition will be yours for the taking on the Epic Games Store between January 9-16.