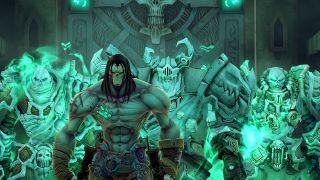 Epic's 12 Days of Free Games is over, but for the start of the new year the store is now giving away a trio of freebies, which you've got a week to grab. The Holiday Sale, which was meant to end yesterday, has also been extended, so you've got another week to get discounts on Control, Red Dead Redemption 2 and a bunch of other recent releases.

This week's free games will let you slaughter your way through post-apocalyptic cities, monster-infested fantasy realms and then cap it all off with a leisurely tumble down a picturesque mountain.

The first two Darksiders, available in their Warmastered and Deathfinitive Edition forms, are the best of the series, which peaked with the second game but has apparently had a bit of a return to form thanks to the Darksiders Genesis spin-off. If you fancy a more linear action adventure romp, the first game should keep you busy, while the sequel developed open-world RPG tendencies and you also get to play as a sad goth boy.

If the only slaying you want to do is on the slopes (it's only the start of the year, I promise I'll get better), Steep should have you covered. It's an open-world winter sports affair where you can ski, glide around in a wingsuit and enjoy some brisk exercise with not a single demon in sight.

All three games are free until January 9.