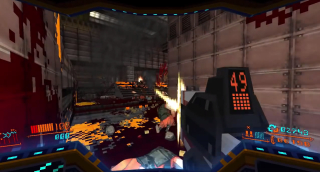 While the obscenely nostalgic Kickstarter launch trailer was enough for some, I'm genuinely excited to play STRAFE. An old school, fast-paced FPS with procedurally generated levels is music to my ears, and judging by the pre-alpha gameplay video above, the devs at Pixel Titans know what they're doing.

Projectile firepower is absolutely essential in a game called STRAFE, and the commentators make a point of mentioning this, demonstrating the potential for 'bullet hell' scenarios akin to a monster closet of Mancubus in Doom 2. Elsewhere, enemy blood can be deadly in some scenarios, which is a pretty nifty idea, but I hope it doesn't slow the game's breakneck pace too dramatically.

STRAFE's Kickstarter has seven days to go, and they're still a bit far from their $185,065 goal. If you like what you see above throw them some coin.