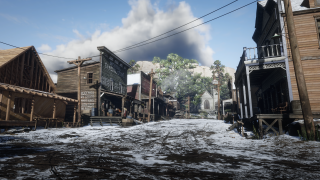 Pop into Red Dead Online and you'll find the place blanketed in snow, even the normally humid swamps of Lemoyne. Along with the winter weather, there are a few more festive touches, changes to Showdown modes, and Rockstar will soon be doling out free gifts.

Andy Kelly and I hopped on our horses this morning and took a trip around the map, and it turns out it wears winter very well. Red Dead Redemption 2 is already one of the best looking games on PC, so it's not a surprise, but the temporary makeover is especially welcome now that I've spent hundreds of hours exploring the world across two versions of the game.

Even the extremely muddy Valentine looks fetching with a dusting of snow, and the saloon's drunks and gamblers can now enjoy some Christmas tunes between shots and poker. I noticed the new music yesterday, along with a sad little Christmas tree at my camp, before the snow started to fall, and you might hear it when you visit other saloons.

In Saint Denis, they put on a bit more of a show, and yes, I did stand on a street corner for a whole in-game day waiting for it to get dark enough for the lights to really pop. At one point it looked like someone was going to murder me, but then they just punched a random NPC instead and ran off. A Christmas miracle. So far I have been unable to instigate a snowball fight, unfortunately, but it's still very nice to look at.

It's snowing in some of the Showdown modes, too, and you'll be able to play on the festive maps through January 6. If you play between December 23 - 25, you'll also net yourself a box full of gifts. Most of it's the sort of stuff that's just going to take up room in your inventory, like 20 biscuits, but there's also a Krampus shotgun variant.

More coupons should show up in the Benefits section of the menu if you've logged in since December 13, including a treasure map, discounts and extra cash for starting a new role. You'll be able to get them if you log in before January 6. Then you'll get another XP bonus if you play between December 31 and January 6.

Collectors, meanwhile, will have new tasks from Madam Nazar, who is after the Festive Feast Collection and the New Year Collection, but hopefully we can think of something better to do across the holidays than scour the map for goose eggs and pocket watches.

Check out the full list of bonuses and free gifts here.