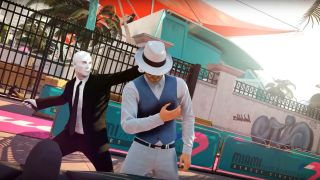 The Golden Joystick Awards are upon us again and if you've been keeping up with the live stream, you'll have caught the new Hitman 2 Accolades trailer. If you missed it, or just fancy watching it again, we've got it right here. You can check it out, below.

Hitman 2 launched this week and the Accolades trailer is all about how to kill in the most creative and sneaky way possible. We're treated to a medley of mishaps that befall Agent 47's targets, from steady sniper shots to the less-than-subtle explosions.

The trailer shows off the variety of ways that you're able to take out your marks. "Make the world your weapon," the trailer tells us and Agent 47 does just that, using whatever is on hand; a Fisk-style hammer execution or, if you prefer a less hands-on approach, shoving someone over a cliff or dropping a boat on their head will get the job done equally as well.

Hitman 2 treats us to the colourful environments of various locations, including Miami, Colombia, and New Zealand. And for the first time, the game sees the introduction of a new multiplayer offering called Ghost Mode, which Samuel reported on last month. We also have the first limited time Elusive Target event to look forward to, that will see players hunt down poor Sean Bean in the hilariously titled 'The Undying' mission.

Phil says Hitman 2 is great in our review, but if you're still undecided if it's worth your time, you should probably have a look at these homing briefcases and tell me the game isn't worth checking out on that basis alone.

You can find the rest of our Golden Joystick Award coverage on Twitch.