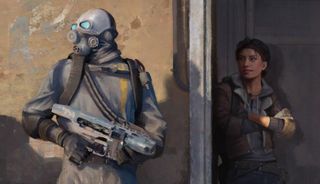 Update: And now it's official: The full Half-Life Collection is, for awhile at least, free to play. "Half-Life: Alyx is coming in March, and we are celebrating early by making all games in the Half-Life Collection FREE to play for Steam users, from now until the day it launches," Valve said in announcement.

While there are no bundles known as the Half-Life Collection, there's The Orange Box and the Half-Life Complete bundles, but neither of them are free. And despite the notification, which links to an error page, Valve hasn't made any announcements.

It looks like the notification was sent out too early, but that doesn't explain why the bundle has a different name. It could simply be a mistake, so the notification could just be referring to Half-Life Complete. It could also be that Valve's going to release a third bundle, which will eventually contain Half-Life: Alyx.

I've reached out to Valve to find out more about the event, so keep an eye out for updates.