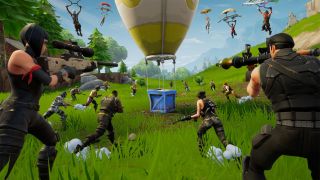 Back in June, Epic boasted that Fortnite had 125 million users after only a year. That’s quite a lot of people. Now it’s 200 million. That’s a 60 percent increase in less than half a year.

That’s obviously not 200 million people all playing Fortnite, though certainly a lot of them are. Earlier in the month, Epic Games Korea CEO Sun Chul Park revealed that Fortnite had exceeded 8.3 million concurrent players. That’s like every single person in Switzerland playing at the same time. Maybe that’s exactly what’s happening. The Swiss are just playing too much Fortnite.

It certainly helps that Fortnite is now available on pretty much every platform, from PC to phones, and seems impossible to escape. It also managed to beat the competition at the Golden Joystick Awards recently, taking away Game of the Year.