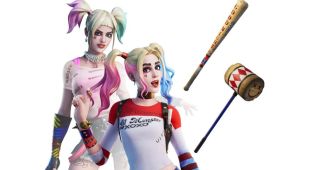 Fortnite is continuing its tradition of movie crossovers with a Birds of Prey event soon, and thanks to a dataminer we can get a a sneak peek at the Harley Quinn skin that you'll be able to get in the Item Shop.

Warner Bros. and Epic first teased the crossover last month, when the Fortnite Twitter account replied to a cast picture with "See you soon Harley!" It's still not announced anything officially, however, but dataminers have uncovered some details, along with the skin (cheers, Lucas7yoshi) below.

Harley comes with a default skin and an unlockable style that you'll be able to sport once you've finished a series of challenges.

Epic has only said that "a new event starts soon," but prolific Fortnite leaker ShiinaBR reckons it could be tomorrow at 7 pm ET. Shiina's source was also correct about there being a second style and challenges, too, though that detail wasn't really a surprise.