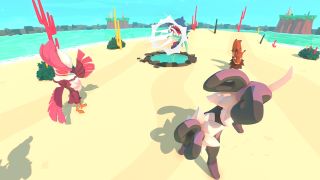 The three Temtem starters are all rather adorable, but which one should you choose? Airborne Archipelago is filled with weird and wonderful beasts that each slot into a wider Temtem type chart. You’ll get around to collecting these soon enough, but choosing your very first follower is a big decision!

I’m here to help you begin your journey with a reliable creature by your side as I break down each of the Temtem starters strengths, weaknesses and where they later appear in the wild. Find out which is the best starter for your Temtem squad and learn how to use them in battles.

The three Temtem starters are:

Crystle is a well-rounded Temtem starter as it has balanced base stats and a strong set of techniques (abilities). Initially equipped with two Physical techniques, Crystle can deal considerable damage to opponents despite its primary stats being in Defence and HP.

Crystal Temtem are difficult to come by in the early portions of the game so adding one to your squad early will give you a competitive edge. Later it’s worth learning Crystal Spikes—a High Priority technique that deals 120 damage and Crystal Dust, a special attack that includes Wind type properties.

Note: every technique has a Priority rating which determines when the action will be performed within a turn. Priority is also dependent on individual Temtem’s Speed stats; the higher the Priority, the earlier the action will occur.

Smazee’s strengths are its high Speed and Attack Power, although these stats don’t compensate for its low Defence stats. If you’re set on picking this Melee type, Skunch and Saipat's stronger stats make them better options. Both can be found on Deniz Island.

Smazee’s strongest move is Uppercut, which deals 80 damage to opponents. Most of its techniques are of a High Priority due to its notable base Speed stats. Smazee is the weakest starter choice as it offers few advantages early on. Unlike Crystal types, Melee Temtem are far from rare, so it's worth catching your own after you've made your first pick.

Mental Temtem are quite rare, cementing Houchic as a viable starter, although their playstyle is slightly trickier to master. Both of its starter Techniques (Psy Wave and Hypnosis) have one Hold, meaning you’ll have to wait a turn before you can use them.

Early battles with Houchic may feel less rewarding than the other starters as you’ll use be forced to use the same strategy in most battles. Having fewer options to adapt mid-battle can result in situations feeling a little stale until you’re sufficiently levelled. Thankfully there is a decent payoff once you unlock Beta Burst, a special move that inflicts 100 damage. This new Technique is worth the wait and can be used with Hold techniques to diversify your battle plan.