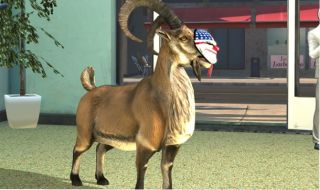 Remember that “New Super Secret DLC” trailer for Goat Simulator we (well, some of us) got a laugh out of back in early December? Now we know what it's all about: Overkill's heist game Payday 2 is coming to Goat Simulator.

“Wait!” I hear you exclaim. “Didn't we read about this already?” No, you did not, I reply: What you read about was a Goat Simulator mode that, for reasons I don't entirely understand, is being added to Payday 2. This is similarly strange but flows in the opposite direction by adding a team of four goats—although it actually appears to be one goat, plus a flamingo, a camel (not a horse!), and a dolphin in a wheelchair—who pick up missions from Pranknet, “the static contract database,” and then earn money by pulling them off.

If pranks aren't your thing (and by “prank,” I assume the developers mean running around breaking stuff), you may opt for freeform smash-and-grabs instead: Hogtie people with cable ties, hijack their cars, or even race your own “Space Cars,” just like in that movie with Charlize Theron. You can use your ill-gotten gains to buy masks, or blow it at the Mahatma Gambling Casino. You'll also have the opportunity to unlock “new, even dumber stuff,” like the Canon, which may or may not be intentionally spelled with one “n,” or a burger.

Goat Simulator: Payday will apparently go live tomorrow (the Steam link is here but not active yet), which is also when the Payday 2: Goat Simulator mode will kick off, and will cost $5/£5. In the meantime, you can dig into the details at goatpayday.com.