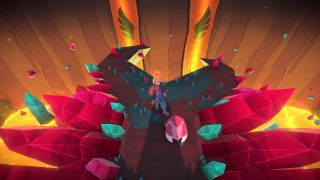 Temtem starters: pick the best one for you
Temtem evolution: how to evolve your creatures
Temtem type chart: every type's strengths and weaknesses
Temtem list: all the species we know so far
Temtem Ganki: catch the best Temtem in the game
Temtem Oceara: make the rare Water type yours

What are Luma Temtem, and how do you find them? Tamers are ravenously exploring the world of Temtem: they're exploring, catching, collecting, battling, and just generally having a whale of a time. As you travel across the game's six airborne archipelagos, you'll see many different creatures that slot into a certain type and find  out how evolution works. But there are super special Temtem that are the rarest of them all, Luma Temtem.

These extra special creatures are similar to Shiny Pokémon, they have a different appearance and better stats than their standard siblings. You'll know when you come across one straight away: its striking color palette and glowing, sparkling aura are unmistakable.

Regarding stats, Luma Temtem always generate three perfect single-value stats; they're not just cute, they pack a punch, too. Single values determine a Temtem's stats, and having three perfect SV's gives your Temtem a strong advantage in battle.

How to catch Luma Temtem

Getting your hands on a pink Luma Playtpet isn't easy. There are currently four different ways of getting a Luma Temtem: catching one in the wild, hatching one from an egg, or trading for one.

Catching one in the wild might seem the easiest option, but the odds of running into them is ridiculously rare. Your chances of coming across one as you're skipping through the game's grassy areas are 1 in 8000, so the odds are pretty slim. There's currently no way to increase your chances of—like with items or in certain areas, but if developer CremaGames introduce some, I'll update this guide with that information.

However, if you do come across one, don't panic. Slowly whittle down its health and use debuffs on it, such as Sleep. If you're caught in a position where all your Temtem are too powerful for your target, play the waiting game. Keep telling your Temtem to rest and the Luma Temtem will eventually exhaust itself. When its health is in the red chuck a Temcard and cross all your fingers and toes.

The second way is breeding and hatching an egg. Breeding a Temtem with a Luma parent has a 1 in 600 chance—but with two Luma parents, it's 1 in 60. Keep in mind, however, that Temtem have a fertility rating, so they have a limited number of breeding chances.

The third is to trade with another tamer. This is almost as unlikely as searching in the wild or breeding, but some may trade for in-game money. The fourth (and most expensive) way is to enter the Saipark.

Temtem's 0.5.12 patch notes have introduced a zone called the Saipark. This is the game's first natural reserve in all of the archipelagos and can be a prime spot for catching the luma Temtem you're after. Each week, the park will have two different species of Temtem in high density and these species present an opportunity of running into the luma Temtem you would like.

A few points about the Saipark, you need to have beaten the main story before you can enter the zone. Regular Temtem cards do not work inside and instead, players will have to buy special saicards that only work inside the zone. To get the saicards, players need to pay an initial fee to enter the park and with the entrance fee comes a pack of the saicards. Players can buy more of these cards but the price will increase each time.

The Saipark is an expensive way to catching a luma Temtem but if you're after a specific luma Temtem then it's an easier way to snag that cute critter rather than having to grind.