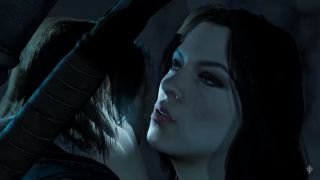 The team behind Middle-earth: Shadow of War have re-imagined the ginormous spider Shelob as an attractive woman with a posh English accent, in a new trailer for the Shadow of Mordor sequel, which you can watch below. The trailer later shows Sexy Shelob turning back into a big arachnid, so there is some continuity with the books and films.

When she's not wrapping Elijah Wood up in silk, or getting stabbed up by one of the Goonies, Shelob likes nothing better than turning semi-undead rangers against their elvish ghost pals—the above trailer showing the spider queen sowing seeds of doubt in protagonist Talion's mind.

The uneasy relationship between the ranger and his spectral buddy Celebrimbor seems to play a large part in Shadow of War's narrative, which you'll be able to experience for yourself on October 10th.